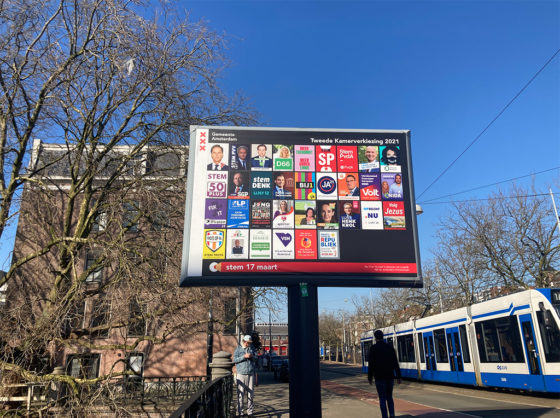 Dutch voters are going to the polls in municipal elections this week, but local issues have been overshadowed in recent weeks by the war in Ukraine.

A poll by I&O Research published on Monday indicated that just under two-thirds of people (64%) planned to cast their vote, compared to 75% who responded to a similar survey in 2018. The actual turnout four years ago was 55%.

The same survey found that only 41% of people were following coverage of the elections, a marginal increase since the campaign began, while 87% were following the war.

Differences between parties have also taken a back seat since the Russian invasion began. The coalition party D66 published full-page advertisements this week urging people to ‘vote in peace’ and with the colours of the Ukrainian flag running along the bottom.

The war also dominated Friday evening’s radio debate on NOS, with the VVD’s parliamentary group leader Sophie Hermans calling on people to use the voting booth to demonstrate ‘how important democracy is, and that freedom is not automatic’.

There were critical voices too, such as Socialist Party (SP) leader Lilianne Marijnissen, who asked if increasing defence spending was the right response to the invasion. ‘Will it help Ukraine if shipping weapons turns it into a larger, more terrible war? The question needs to be asked.’

GroenLinks leader Jesse Klaver pointed out that local authorities have a key role to play in providing shelter for refugees, more than 6,000 of whom have arrived from Ukraine in the last two weeks. ‘It will really make a difference as to which aldermen are at the controls,’ he said.

Refugees have also been a rallying point for Geert Wilders, leader of the anti-Islam PVV, who has called for Syrians and Muslims to be kicked out of the country to make room for ‘a limited number of genuine refugees’ from Ukraine.

One party whose vote share is closely linked to sentiment around the war is the far-right nationalist FVD, whose leader, Thierry Baudet, has been an outspoken supporter of Vladimir Putin.

In February Baudet described the Russian president as ‘the leader of conservative Europe’ and a ‘wonderful guy,’ and even after the invasion began he claimed Putin had been a ‘paragon of mildness’ in his treatment of the Ukrainian people.

Baudet did not attend Friday’s debate because he was in Amsterdam promoting his new book, which claims the coronavirus pandemic was used as a cover by the World Economic Forum to strip western societies of their democratic freedoms.

Gert-Jan Segers, leader of the ChristenUnie, attacked the FVD leader’s stance in the radio debate. ‘Politics is often about shades of grey, but in this war it really is black and white. If you think Putin is a wonderful guy your moral compass is broken,’ he said.

FVD won 5% of the vote at last year’s general election, when it promoted itself as the anti-lockdown party, but latest polls suggest the party, which is fielding candidates in 50 of the 333 municipalities, is down to around half that level and falling.