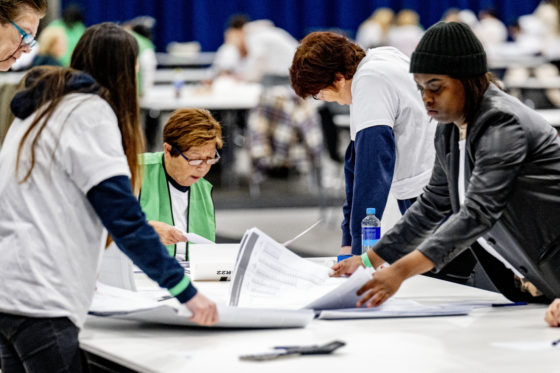 Counting in Rotterdam, where less than 39% of voters turned out. Photo: ANP/Robin Utrecht

Local parties were the big winners in the municipal elections, taking around 36% of the votes – more than three times as much as the largest national party, the right-wing liberal VVD.

The share of the vote for locally-based parties was up from 29% four years ago, cementing their position as the dominant force in rural politics.

But in the cities as well, Leefbaar Rotterdam and Groep de Mos in The Hague topped the poll with an increased vote share.

Politicians expressed concern about the low turnout, which was down to just over 50.3% but fell as low as 38.9% in Rotterdam, a development mayor Ahmed Aboutaleb described as ‘not just disappointing, but saddening.’

Home affairs minister Hanke Bruins Slot said the government needed to ‘look at the reasons for the low turnout’ in its assessment of the elections.

The VVD was the largest of the national parties, with 11.5% of the vote, down by around 2% from four years ago. The Christian Democrats lost around the same amount, finishing on 11.2%, but are still expected to win more council seats than Mark Rutte’s party.

Some pollsters had predicted the CDA’s vote share could tumble to around 7% as it suffered a backlash in rural communities, where the government’s plans to buy out farmers to meet its environmental targets has met strong resistance.

Party leader Wopke Hoekstra said: ‘Of course I would have loved to retain all our seats. That’s not feasible, but at the same time the result is better than expected.’

But the CDA suffered some heavy local setbacks, particularly in rural areas such as Noord-Brabant and Twente.

In Tubbergen, where the party had an absolute majority for the past eight years, its share of the vote tumbled by 32% as two local parties, LokaalSterk and Keerpunt 22, entered the fray.

Of the other national parties, Labour (PvdA) scored a significant win in Amsterdam, going from fourth to first with around 17% of the vote. If the provisional result is confirmed it will clear the way for a three-party centre-left coalition with GroenLinks, who were the largest party in 2018, and D66, who topped the poll four years earlier.

GroenLinks had a mixed night, losing ground in Amsterdam, Rotterdam and The Hague, but increasing its lead in Eindhoven, where it is on course to raise its seats from seven to nine.

GroenLinks also remains the largest party in Utrecht and Groningen despite seeing its share of the vote fall, though in both cities the coalition lost its majority. Party leader Jesse Klaver nevertheless struck an upbeat note, saying his party had made a ‘big recovery’ since last year’s general election, when it took 5.2% of the vote.

D66 also had to contend with overall losses, particularly in Amsterdam, but gained ground in The Hague, where it gained 3% to become the second largest party behind Groep de Mos.

Groep de Mos is likely to be bypassed again by the current coalition of D66, VVD, GroenLinks, PvdA and CDA, though one of the last two parties could drop out and still leave the others with a narrow majority.

In Rotterdam the success of Leefbaar Rotterdam, which held its 11 seats and increased its vote share to 21.3%, means leader Robert Simons will now take the lead in the coalition talks, after Leefbaar was shut out of the last coalition. The six parties would have to grow to seven or eight this time to form a majority without Leefbaar.

It was a bad night for the Socialist Party (SP), which saw its vote shrink from 4% to just 2.7% and lost out in its Brabant stronghold of Oss to local party VDG. Leader Lilianne Marijnissen said her party had suffered from a lack of focus on local issues and the ‘total lack of trust in politics’.

Several smaller parties scored impressive results, including the animal rights party PvdD and pro-European Volt. The PvdD won more than 6% of votes in Amsterdam, The Hague and Utrecht, enough to secure three seats in each city.

Party leader Laurens Dassen hailed the result as a ‘fantastic start’, but acknowledged that the dispute with MP Nilüfer Gündogan, who was reinstated as an MP on the orders of a court after she was suspended pending an investigation into alleged sexual misconduct, had played a role in the campaign.

Minority rights party BIJ1 won two seats in Amsterdam to take its total to three and also picked up seats in Utrecht and Rotterdam.

Its best result was in Lelystad, where it took 5% of the vote to win two seats, but in Amsterdam it lost two of its three councillors as breakaway party JA21 made gains and outside Flevoland it won less than 3% of the vote.

Geert Wilders’s PVV also had a bad night, holding on to 61 council seats but losing two of the four it held in his home town of Venlo.