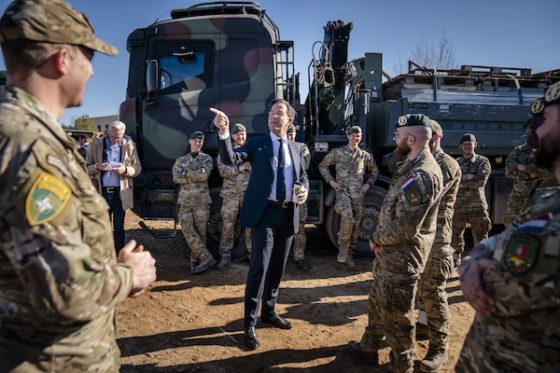 Prime minister Mark Rutte has reiterated his call for the EU to become less dependent on Russian oil and gas, this time during a visit to Lithuania.

‘We have to reduce that dependency,’ Rutte said, following a meeting with Lithuanian president Gitanas Nauseda. ‘It must happen as quickly as possible but it will not be overnight.’

Nauseda for his part said his country wants to stop energy imports from Russia completely and ‘set a good example to Europe’.

Rutte was in Lithuania as part of a two day tour of countries on the edge of Ukraine conflict.

EU foreign affairs chief Josep Borrell said on Monday he wants to investigate whether the EU can impose more sanctions on Russia, which could affect their energy and oil sectors, including an end to oil imports.

Borrell said he plans to discuss this with EU leaders, ahead of a meeting of EU foreign ministers in Brussels.

On Tuesday he will be in Turkey for a meeting with president Recep Tayyip Erdogan. The two will discuss the war in Ukraine.

Rutte said earlier that Turkey, a Nato member, is extremely important for the defence of the eastern flank. The meeting is taking place as part of preparations for Thursday’s Nato summit.