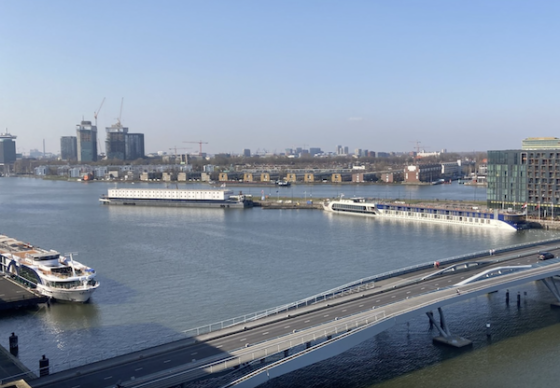 Amsterdam is putting refugees up in a river cruise boat. Photo: Carol Padula

Local authorities in the Netherlands are using double standards when it comes to providing accommodation for refugees, says Jaap Velema, the mayor of Westerwolde where the refugee reception centre of Ter Apel is based.

‘It is great that my colleagues in other council areas are queuing up to provide housing for tens of thousands of refugees from Ukraine,’ he told current affairs show Nieuwsuur. ‘But it is shameful that no other local authority at all has offered to provide care for refugees from other countries.’

The Ter Apel centre, where all refugees are required to register, is overflowing with asylum seekers from countries like Afghanistan and Syria, and the shortage of accommodation for refugees with a residency permit is growing.

The situation will be made worse on April 1, when at least 13 local councils will end their contracts with the refugee settlement agency COA, slashing the number of available beds by 2,500. A further nine locations will close on May 1.

Although some have made their way there, Ukrainians do not have to register in Ter Apel because their stay in the Netherlands is regulated though a friendship treaty with the European Union. Instead, they can lodge with friends or volunteers, or make use of the thousands of beds with local councils are coming up with.

‘It is understandable that people are keen to house Ukrainians but people from other war zones, such as Syria and Afghanistan, have the same rights,’ said Groningen mayor Koen Schuiling. However, the situation in Ter Apel, he said, is ‘insupportable and inhumane.’

The difference in treatment has not gone unnoticed by commentators.

According to philosopher Paul van Tongeren in the Volkskrant, the Ukraine crisis is showing that ‘we are not the cosmopolitans that we thought we were, the universalists convinced of the human rights of every human being.’ Instead, ‘we feel a stronger responsibility and sympathy for the people from our own continent, who are closer and resemble us more, than for refugees from Syria, Afghanistan and Eritrea,’ Van Tongeren wrote.

That changing self image ‘should prompt us to ask ourselves who we want to be at a time in which political relationships have changed Europe and the world’, he concluded.

De Groene Amsterdammer also notes the disparity in attitude towards refugees, including that of VVD junior justice minister Eric van der Burg whose welcoming stance is ‘in marked contrast with his party’s policy [towards immigrants] over the last years’, former SP parliamentarian Sadet Karabulut wrote.

The same kind of concerted effort that has given Ukrainains a roof over their heads, as well as money and the opportunity to work here, should be extended to all refugees, Karabulut said.

‘The Dutch have come to train stations to welcome Ukrainians. (..). That brings hope for the future and may prompt politicians to create perspective for a humane European policy towards refugees, including for refugees from further away, who look different.

‘We must never forget that the western political leaders are partly responsible for (illegal) warfare, war crimes and for the over 37 million people who are currently fleeing from Afghanistan, Iraq, Libya, Syria and other countries. They too deserve a warm welcome and an end to war.’

The NRC quoted American political scientist Lamis Abdelaaty who has researched the question of why some countries exclude some refugees and welcome others. Some of it has to do with identity, she is quoted as saying.

‘Ukrainians are seen as white, Christian. People sympathise with refugees who they believe share their ethnicity and religion,’ she told the paper. ‘It also matters that these people are fleeing a Russian invasion. By welcoming them, European countries are making clear they condemn Putin and show which side of the conflict they are on.’

But however warmly the Ukrainians have been welcomed, organisations are doubtful this partisan generosity, will last, said commentator Jarl van der Ploeg in the Volkskrant.

‘I am very worried,’ he quoted former Amnesty director Eduard Nazarski as saying.  ‘We have temporary locations in place across Europe but where are we going to put everyone if the war goes on for a long time? How do you organise  the psychological and medical help war victims need? Care and housing happen to be the two major bottlenecks in this country.’

Perhaps the best comparison is with the display of solidarity with care workers who were clapped at the beginning of the pandemic, said Van der Ploeg. ‘The easiest moment to manifest yourself as a good people is before the first sacrifices have to be made.’