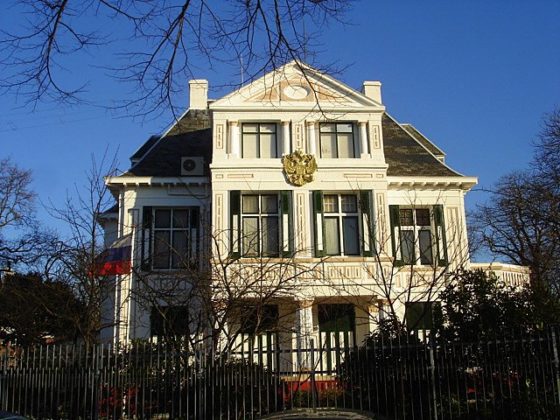 Embassy of Russia in The Hague Photo: Roman Lukaschuk via Wikimedia Commons

The Netherlands has expelled 17 Russian diplomats for spying, following information from the AIVD and MIVD security services.

The 17 were told they have two weeks to leave the country.

‘These people have diplomat on their business cards but are busy with something else,’ foreign affairs minister Wopke Hoekstra said. He expects that Russia will expel Dutch diplomats in response.

The expulsion was coordinated with other countries including the US, Poland and Bulgaria. The Belgian government announced this afternoon that it is expelling 21 Russian diplomats and Ireland has said it will send home four ‘senior Russian officials’. The move comes a day after the Ukrainian defense intelligence ministry released the names of some 600 Russian spies.

‘We have taken this decision in the interests of the Netherlands’ security, given the changing context, the war in Ukraine and the increase in Russian assertiveness,’ Hoekstra said. In total, Moscow has 75 diplomats accredited in the Netherlands, including the 17 being told to leave.