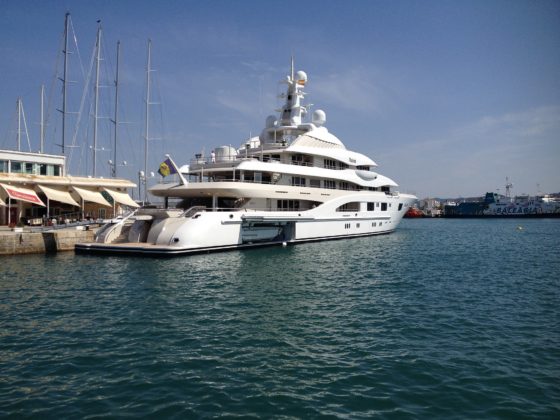 The Valerie, an €89 mn superyacht, has been seized by Spain. Photo: Wikipedia

MPs have called on finance minister Sigrid Kaag to explain why Dutch financial institutions have frozen just €6 mn of assets owned by sanctioned Russians so far.

Kaag said in reply to a motion by Socialist Party (SP) MP Jasper van Dijk that 132 institutions had declared assets owned by clients on the European Union’s sanctions list.

However, more than 80% of the replies came from trust offices, which do not hold assets directly, according to figures in Kaag’s letter. Eight banks said they held €1.75 mn in frozen assets, investment firms held €3.99 mn and €340,000 was held in four pension funds.

Van Dijk told the Financieele Dagblad he would pressing foreign affairs minister Wopke Hoekstra on the issue in parliament on Thursday.

‘This is a token amount, we’re talking about multi-billionaires,’ he told the Financieele Dagblad. ‘We’re using strong language, but in reality little is happening.’

The FD calculated last year that Russian firms had around €90 bn invested in the Netherlands at the end of 2020. Of this €35 bn was linked to individuals on the EU’s sanctions list, which now runs to 862 individuals and 73 companies.

Independent MP Pieter Omtzigt contrasted the Dutch approach with Belgium, which has frozen €10 bn of Russian assets since the invasion of Ukraine began. ‘This is crying out for an explanation,’ he said. ‘It seems as if the Netherlands is applying the sanctions slowly and interpreting them narrowly.’

Other countries have also been more proactive in seizing Russian assets. Spain’s prime minister Pedro Sanchez announced on Tuesday that the Valerie, an 85-metre superyacht which was recently put up for sale with an €89 mn price tag, had been seized in Barcelona even though its owner’s name is not on the list of sanctions.

Sanchez said the EU had imposed measures against its owner, Sergey Chemezov, CEO of defence manufacturer Rostec Corporation, following the annexation of Crimea in 2014. ‘There will be more,’ Sanchez added.