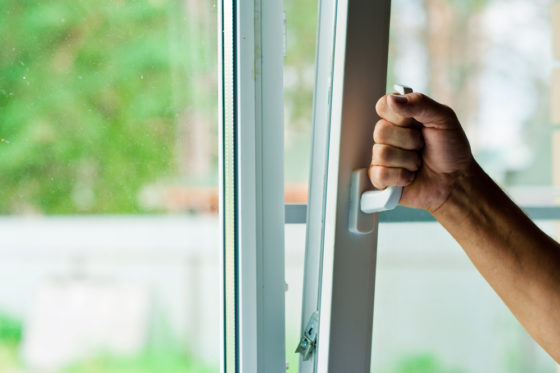 Dutch politicians have admitted that local planning permission policy is out of date, and needs an overhaul to achieve climate change goals.

In cities such as Amsterdam, where many buildings are ‘protected’, home owners are often banned from putting in double glazing at all, while lengthy planning permission is required for jobs like replacing rotten window frames.

But experts say improving domestic insulation is an important part of reducing domestic energy use and employing alternatives to gas such as heat-pumps, which only work in well-insulated homes.

At an election event for internationals on Wednesday night, Reinier Dantzig, the head of the city’s liberal democrats (D66 ) admitted that the capital’s buildings policy is not fit for the 21st century. ‘We have to ensure home owners and tenants can find good contractors, but you also need to ensure that some regulations are cut,’ he said. ‘In most listed buildings, you can’t even put in double glazing – and this is something from the days of the past.’

Most political parties in the Dutch capital are campaigning on a platform of sustainability for the local elections on March 14, 15 and 16, and leading parties like GroenLinks say improving the city’s ageing building stock is part of this.

Amsterdam, which currently has a green-left coalition, has said that it wants to ‘go green faster than planned’, announcing funds to help insulate buildings, install solar panels and green roofs, as well as policies for emissions-free transport, more windfarms and even geothermal energy production.

But it has already admitted it is unlikely to achieve such ambitious goals, and last year even asked for the help of a ‘mini citizen’s council’.

However, a freedom of information request submitted by Dutch News has shown that the capital city is not measuring the performance of its own planning permission services in helping people make their buildings more sustainable.

Between November 2020 to October 2021, officials received 1116 planning requests including placing or replacing windows and window frames.

One in eight requests was either refused, ‘withdrawn by the applicant’ or ‘not handled’ according to DN calculations. Three applicants had to take legal action in order to have their requests approved.

Although some requests involved other measures such as adding balcony space or skylights, according to the data provided, Amsterdam planners repeatedly turned down requests just to replace window frames. In the past year, 59 of the applications provided to Dutch News (5%) were refused outright.

Meanwhile, residents who have submitted requests to insulate their windows complain about long delays and extensive bureaucracy, including demands for detailed material such as 3D diagrams of replacement window frames.

Jan Paternotte, parliamentary leader of D66 liberal democrats and a former head of the Amsterdam party, told Dutch News that it is time to update and simplify building policy to achieve climate change resilience in the Netherlands.

‘It isn’t achievable [if you say you can’t double glaze buildings],’ he said. ‘Although I can understand that you don’t want to put solar panels in very visible places, and that you generate energy in places where it doesn’t disturb people.’

However, he said the Monuments and Archaeology (M&A) services and Quality Standards Commission (CRK) were charged with making ‘the current city, including its listed buildings, more sustainable and fit for the future…working on helping people find solutions rather than just refusing applications.’

He pointed out that a new service, the sustainability office (Loket Duurzaam Erfgoed) has been established to help non-professional building owners go green, and assisted 90 residents in 2021.

At the election event this week, Amsterdam councillors and candidates pledged to do more.

‘We have a fund of €10 million [for making local council buildings sustainable], which is a good start but not enough,’ said D66’s Dantzig.

Training up the skilled workforce needed is another challenge, added Fatihya Abdi, a council candidate for the PvdA labour party. ‘One huge problem we also foresee is that we have a huge workforce shortage, [especially] of technicians, the people who have to help us meet our climate goals,’ she said. ‘We want to invest in more internships, and give people more guidance to do these kinds of jobs.’