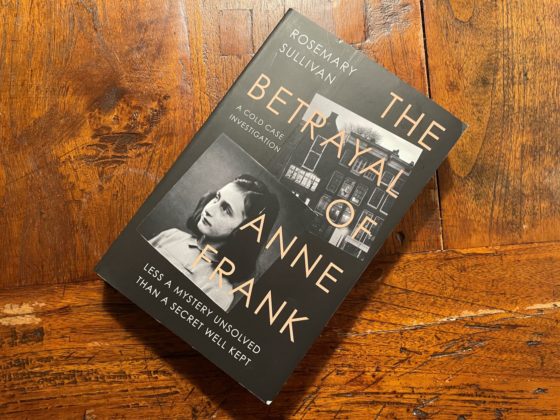 The Dutch publisher of a controversial book on the betrayal of Anne Frank has withdrawn the book, after a detailed rebuttal by a team of historical experts.

Ambo Anthos publishers apologised in English and Dutch and said that ‘based on the conclusions of this report, we have decided that effective immediately, the book will no longer be available’, and bookstores should return their stock.

Meanwhile the granddaughter of Jewish notary Arnold van den Bergh, who was accused by a ‘cold case team’ and author Rosemary Sullivan of betraying Anne Frank, called on HarperCollins to stop global publication.

At a presentation in Amsterdam on Tuesday evening, given in English for the attention of a worldwide audience, eminent historians refuted the claim that Van den Bergh betrayed Anne Frank’s family as well as other Jewish people in hiding.

They have published a peer-reviewed report criticising the argumentation and use of historical sources by a ‘cold case’ team that took six years, artificial intelligence, public subsidy and the help of a retired FBI detective to reach its conclusion.

The historians claim there is no credible evidence that there were lists of addresses of Jewish people in hiding, give evidence that months before the raid on the secret annex, Van den Bergh had gone into hiding in Laren, and say an anonymous note accusing him contains factual inaccuracies and is unreliable.

Mirjam de Gorter, granddaughter of Van den Bergh, addressed the Canadian book author and publisher directly, saying her own story had been ‘distorted’, interviews with her requested ‘under false pretences’ and accusing the cold case team of displaying ‘a profoundly immoral way of thinking’.

‘I would like to make an urgent appeal to the American publisher HarperCollins, to all other publishers involved and to any potential filmmakers,’ she said. ‘Take the book out of circulation, refrain from making films of television series with this story as their subject. With this story, you are exploiting the story of Anne Frank, you are falsifying history and you are contributing to great injustice.’

She particularly objected to the way an interview with her was used late in the book in presenting the judgement that Van den Bergh was the accuser, and that she had no chance to read what was written about her and her family in advance.

‘Without such a plot, with a Jewish man as the betrayer of Anne Frank, nobody would have been interested,’ she claimed. ‘This case is not about me but the whole context of the story in which, out of the blue, my grandfather Arnold van den Bergh has been portrayed worldwide as a Jewish scapegoat, moreover Anne Frank’s international prominence as a symbol of the Holocaust is exploited in a particularly dishonest way.’

Since the book was published in January, there has been a storm of criticism from historians. Family members have also expressed their criticism and distress.

Ruben Vis, general secretary of the Organisation of Jewish Communities in the Netherlands (Nik) claimed that the book’s ‘abhorrent’ conclusions had caused ‘colossal’ damage in terms of anti-Semitism and to Holocaust survivors.

Hanco Jürgens, moderator of the presentation, called on the cold case team to look at the new historical report and then revise its conclusions. ‘Tonight a respected Dutch publishing house Ambo Anthos decided to withdraw the book and stop publishing it in the Netherlands,’ he said. ‘We all hope that HarperCollins will do the same.’

The cold case team has since January defended its conclusions, saying that the criticisms have felt like a ‘witch hunt’.