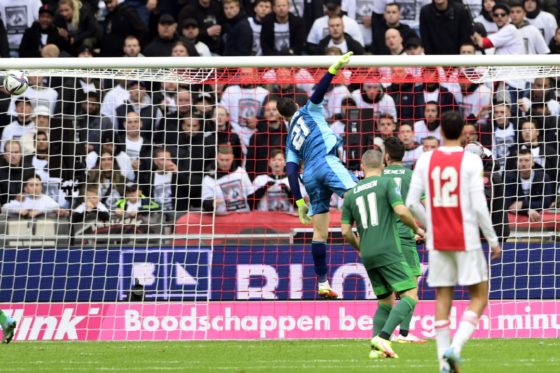 Ajax took a big step towards retaining their Eredivisie title as they came back to beat Feyenoord in a pulsating encounter in the ArenA.

Arie Slot’s side took the fight to Ajax and twice went ahead in the first half through Luis Sinisterra and top scorer Guus Til, the latter profiting from a mistake by Steven Berghuis.

The Rotterdammers looked to have the measure of Ajax until Dusan Tadic squeezed in a free-kick from a tight angle in the 78th minute, before Antony turned in Nicolas Tagliafico’s pass to complete the comeback.

The Brazilian left the field 30 seconds early in bizarre circumstances after he was booked for taking his shirt off in the celebration and then picked up a second yellow card for repeated simulation.

Feyenoord midfielder Jens Toornstra told ESPN: ‘It’s a bitter blow especially after the first half when our plan to put Ajax under pressure was working and we had chances to extend our lead. The last 15 minutes we were mainly defending and it went in twice for them.’

PSV stay two points behind after cruising to a 5-0 win at home to Fortuna Sittard with goals from five different scorers, starting with Philipp Max in the 10th minute and ending with.a simple tap-in for Carlos Vinicius eight minutes from time.

Vitesse Arnhem’s stuttering form continued as they lost 2-1 at home to RKC Waalwijk, for whom Alexander Büttner netted the winner against his former club.

Earlier Groningen strengthened their chances of making the European play-offs by beating Utrecht.

Mo El Hankouri put the northerners ahead in the fourth minute from the penalty spot and six minutes later Michael de Leeuw doubled the lead with a shot from the edge of the penalty area.

Bart Ramselaar pulled one back early in the second half for Utrecht, but Jørgen Strand Larssen made sure of the win in the 89th minute.

Twente Enschede closed to within a point of Feyenoord and pushed bottom side PEC closer towards the exit with a 1-0 win as relegation rivals Sparta came away from Nijmegen with a point following a goalless draw.

AZ lost ground on Twente but rescued a point at struggling Willem II thanks to a stoppage-time header by Zakaria Aboukhlal, after the Tilburgers had gone 2-0 up in the first 17 minutes.

Go Ahead Eagles gave themselves some breathing space with a 3-0 win at home to fellow promoted side Cambuur Leeuwarden, just as their manager Kees van Wonderen revealed he was close to concluding a move to Heerenveen.

His prospective new club booked their first win in the Eredivisie since December 19 as goals from Amin Sarr and Nick Bakker secured a 2-0 win against Heracles.