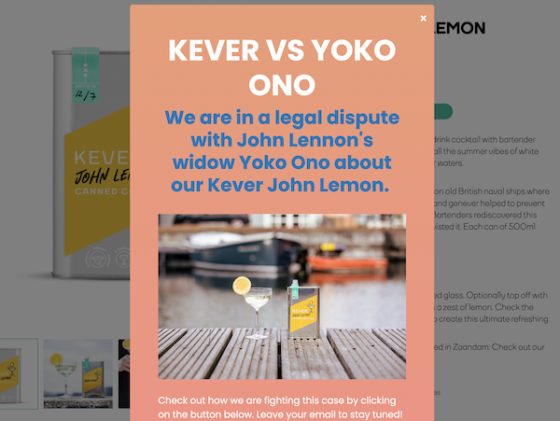 The widow of John Lennon is suing two Dutch entrepreneurs for using the name John Lemon for a jenever-based cocktail drink they have devised.

All cans already sold to bars and restaurants have to be recalled, Kolstee said. ‘We were told we will have to pay €500 a day if we don’t,’ he told the Telegraaf.

It is not the first time Yoko Ono has successfully banned drinks producers from using the name. In 2017, a Polish producer was forced to drop the name after Ono threatened legal action.

‘But they used Lennon’s glasses and we don’t. We mean the name to refer to the John Collins cocktail, which has a similar composition,’ Kolstee claimed.

Lawyer Joris van Manen, who represented Ono in the Polish case, said the argument didn’t cut much ice, but that Ono does not want to get out all the legal guns against young entrepreneurs.

‘Every time someone thinks John Lemon would be good name to sell a product we send a letter. Yoko simply doesn’t want John’s name to be commercialised,’ he said.

Kever has now launched a crowdfunding campaign to pay for the legal costs they have already incurred, as well as the product recall and rebranding.