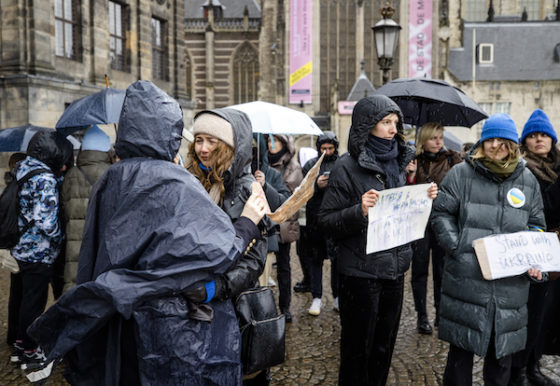 Ukrainians who live in the Netherlands have been gathering in the rain on Dam square in central Amsterdam and outside the Russian embassy in The Hague to show their solidarity with friends and family back home, following the Russian invasion.

‘It is a terrible day and I don’t think any Ukrainian slept last night,’ one young woman said. ‘At midnight we already knew something horrible was going to happen.’

‘It is a tragedy, not only for Ukraine but for the whole of Europe and the whole world,’ said another demonstrator.

‘It is tragic,’ said one young man. ‘I believe in the Ukrainian army and I hope for the support of western countries, but what is happening right now is an atrocity.’

Thousands of people are already on the move in Ukraine and European countries are making preparations to take in refugees.

Dutch refugee organisation Stichting Vluchteling has opened an account where people can donate money to fund the refugee operation and said it had already made €250,000 available for emergency aid.

‘The humanitarian emergency that may emerge from this major military operation should not be underestimated,’ said foundation director Tineke Ceelen. ‘This is the time to show humanity and solidarity… which is why we have opened Giro 999 for everyone who wants to help the Ukrainians.

D66 parliamentary party leader Jan Paternotte has called on the Netherlands to take the lead in giving sanctuary to the refugees. ‘It is right that government leaders are showing their solidarity with Ukraine,’ he said. ‘That also means showing solidarity with Ukrainians who seek a safe haven in Europe.’

At least 141 Dutch nationals have registered at the temporary Dutch embassy in Lviv as being resident in Ukraine. The embassy is remaining open despite the invasion and officials have asked Dutch nationals who do leave to let them know that they have gone.

The Dutch king and queen have also issued a statement, saying that their ‘hearts go out to the people of Ukraine and everyone affected by the violence.’

Response by King Willem-Alexander and Queen Máxima to the situation in Ukraine: https://t.co/xRAPl5AoED pic.twitter.com/rqhL8z8P6u

In Rotterdam, the Erasmus bridge will light up in the colours of the Ukraine flag on Thursday evening, and the flag is also being hoisted from the city hall flag pole in a show of solidarity.

To express our support and solidarity for the Ukrainian people as #Rotterdam, the #Erasmus Bridge will turn blue-yellow tonight. 💙 💛 Today we also hoist the flag of #Ukraine on the city hall. 🇺🇦 pic.twitter.com/sCpj3ON7qI Take care Ilona ❤ @FunksterGM Stay safe

If you are a Ukrainian in the Netherlands and would like to share your thoughts, please get in touch with editor@dutchnews.nl.