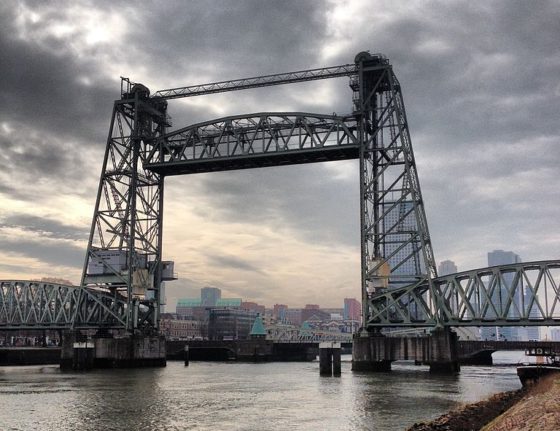 The Hef is an iconic part of the Rotterdam skyline. Photo: elm3r via Wikimedia Commons

A massive steel bridge in Rotterdam is to be partly demolished so that the pleasure yacht being built for Amazon founder Jeff Bezos can sail through it to the sea, local broadcaster Rijnmond said on Wednesday.

The Koningshavenbrug, known to Rotterdammers as De Hef, was renovated in 2017 and the council pledged at the time it would never be dismantled again. But that promise is now set to be broken, Rijnmond said, to let Bezos’ yacht through.

The bridge, placed over the river in 1927, has had a central role in city’s history and was heavily damaged during the bombardment of Rotterdam in May 1940. The bridge is now officially protected.

Bezos’ three-masted yacht is being built by the Oceano shipyard in Alblasserdam but is too big to pass under the bridge when the central section is raised to its full height. Now Oceano and Bezos have approached the council about temporarily dismantling the bridge at their cost.

According to Rijnmond, city officials are prepared to take that step, despite the opposition of local history experts and others.

‘Jobs are important, but there are limits with what you can and should do with our industrial heritage,’ said Ton Wesselink of the local history society Historisch Genootschap Roterodamum.

Project leader Marcel Walravens said the decision is a pragmatic one. ‘It is about a ship with high masts which cannot pass through the bridge. The only alternative is to take out the middle section,’ he said.

Walravens hopes that with proper preparation, the middle section of the bridge will be removed for just one day.

At 127 metres long, Bezos’ yacht is set to be the largest sailing yacht in the world when delivered at some point this year, according to Boat International.