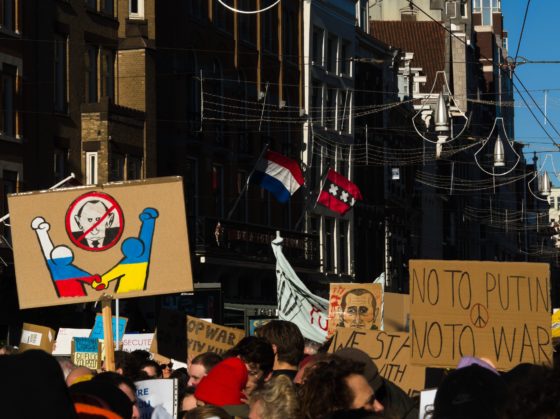 More than 15,000 people turned up to Dam Square in central Amsterdam on Sunday to protest against the Russian invasion of Ukraine.

Many of the demonstrators were from across eastern and central Europe, including Russia.

‘We want to say this is not our war, this is Putin’s war,’ said one group of Russian women who didn’t want to be identified. 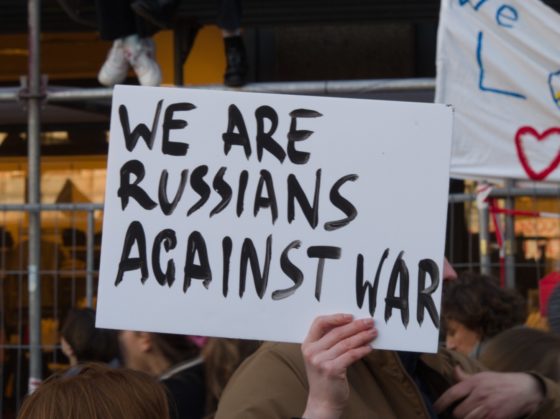 Georgian, Belarussian, Serbian and Latvian flags, amongst others, could also be seen in the crowd. ‘We can’t let it happen again,’ Nino Gvetadze, a Georgian concert pianist, told Dutch News. The Russo-Georgian War left hundreds dead, including Dutch journalist Stan Storimans, and nearly 200,000 displaced after Russia invaded in 2008.

More than just the Dam
Acts of solitary could be seen across Amsterdam. The city hall was flying the Ukrainian flag and the A’DAM Tower on the IJ was lit up in blue and yellow.

Amsterdam wasn’t the only place to see protests against aggression. Hundreds of people gathered on the Grote Markt in Groningen to express their outrage, and groups marched in Heerlen and Arnhem as well. On Saturday, supporters of Ukraine demonstrated in Den Haag. 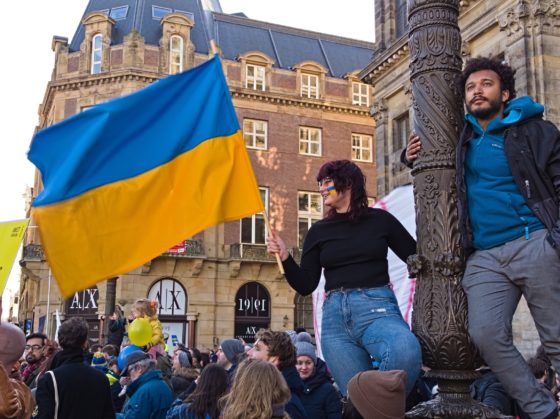 Elsewhere
Around the world, hundreds of thousands turned up to demonstrations. An estimated 100,000 gathered in Berlin near the Brandenburg Gate. Demonstrators gathered outside the Russian Embassy in Dublin for the third day in a row while in London thousands gathered outside of the Russian embassy with some throwing eggs at the building.

Protests were also held in Sydney, Geneva, Frankfurt, Athens, Helsinki and others.

Russians have been turning out to protest across the country since the start of the invasion last week. Human rights abuse monitors in the country say more than 3,000 people have been arrested.