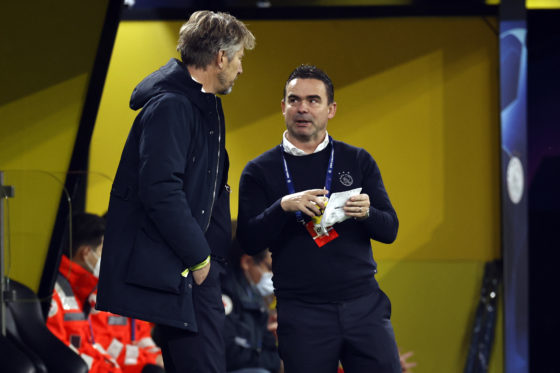 Ajax have parted company with director of football Marc Overmars with immediate effect after he admitted sending inappropriate messages to women working at the club.

In a statement on its website, the club said the messages were ‘sent to several female colleagues over an extended period’, adding Overmars took the decision to leave after discussions with the supervisory board and CEO Edwin van der Sar.

The 48-year-old said he was ‘ashamed’ but was unaware he had crossed the boundaries of acceptable behaviour until he was confronted with it ‘in recent days’.

‘I apologise,’ he said. ‘Certainly for someone in my position, this behaviour is unacceptable. I now see that too. But it is too late. I see no other option but to leave Ajax.’

Leen Meijaard, chair of Ajax’s supervisory board, said: ‘This is a dramatic situation for everyone who is involved in any way. It is devastating for the women who have had to deal with the behaviour.’

Overmars’s departure is noteworthy given the high esteem he is held in at the club. He was a member of Ajax’s Champions League-winning team in 1995 and was appointed director of football in 2012.

He was credited with lifting the salary cap at Ajax, enabling the club to buy players such as Dusan Tadic and Sébastian Haller and reach the semi-finals of the Champions League in 2019. Overmars was also involved in developing players such as Frenkie de Jong and Matthijs de Ligt, whose transfer fees strengthen the club’s financial position.

Meijaard said Ajax consulted an external expert in the course of considering the evidence and speaking to Overmars about his position.

‘Marc is probably the best football director that Ajax has had,’ he said. ‘We upgraded and extended his contract for a reason. But, unfortunately, he has really crossed the line, so continuing as director was not an option, as he recognised himself.’

Van der Sar said: ‘I find the situation appalling for everyone and I agree with Leen Meijaard’s words. In my role, I also feel responsible to help colleagues.

‘A safe sporting and working climate is very important. We will pay even more attention to this in the near future.’