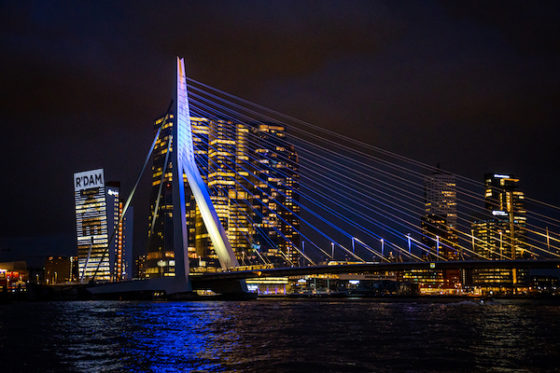 The Erasmus bridge in Rotterdam lit up in the colours of the Ukrainian flag. Photo: ANP MEDIATV

The package of measures which EU leaders have agreed to impose to put pressure on the Russian regime are the toughest imaginable at the moment, Dutch prime minister Mark Rutte told reporters in the early hours of Friday morning.

The sanctions, said Rutte, are a signal to Russia that the world is united against events in Ukraine. ‘Whether the sanctions will have a direct impact, I don’t know,’ Rutte said. ‘But they will have an impact on the oligarchs… on those at the top of the economic ladder.’

The sanctions include restrictions on the transport and energy sectors, as well as the financial sector, and more individuals close to the Kremlin. But they do not include excluding Russia from the Swift international payment system, which some Dutch MPs have called for.

Rutte said that if the Russian aggression was not answered, then the consequences will be much worse for the security of Europe and the Netherlands in long term.

But he said that the EU had never given Ukraine president Volodymyr Zelensky the idea that Europe would intervene at a military level, he said. ‘We cannot help on that.’

Read the BBC’s coverage on the ‘tough and emotional’ summit.

The decision was taken following a request from Ukraine for military support and the items on the list are in line with EU rules for arms exports, foreign minister Wopke Hoekstra said on Friday.