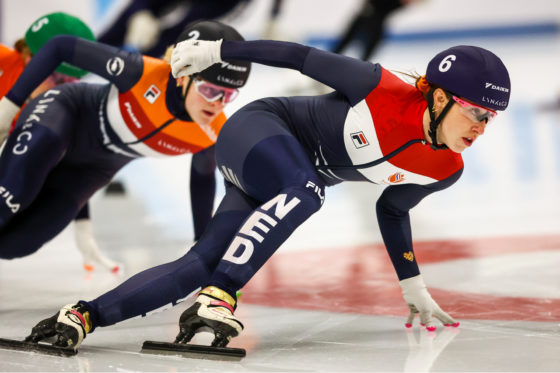 As the Winter Olympics get under way in Beijing, Dutch hopes will rest heavily on the lycra-clad shoulders of the speed skating team.

Skaters won all 20 of the Netherlands’ medals four years ago in PyeongChang, including eight golds – good enough for the nation to finish fifth in the overall medal table.

Global warming has restrained the Dutch appetite for outdoor skating in recent years, but last February’s big freeze showed how deeply the sport is ingrained in the national psyche – even if doesn’t go quite as far as commuting to work on ice, as CBS commentator Katie Couric claimed in PyeongChang.

For the competitors the Olympics will be a sombre affair compared to recent editions, partly because of the coronavirus pandemic. There will be no orange-clad fans and driekleur flags in the stands, no ‘Holland Huis’ party zone and no royal presence – sports fan King Willem-Alexander has opted not to travel because of the pandemic.

The government has also declined to send an official delegation, officially because of coronavirus, but it has also been under pressure from MPs to boycott the Games because of China’s human rights record and the genocide of the Uighur population.

This year 28 of the 40-strong team are competing in speed skating or short track, with veterans like Sven Kramer and Ireen Wüst joined by newcomers such as Sanne in ‘t Hof and Xandra Velzeboer.

Wüst, the most successful skater in Olympic history, will be hoping to add to her tally of 11 medals over four Games. She became the youngest gold medallist in the sport when she won the 3,000 metres in Turin in 2006 as a 19-year-old.

Sven Kramer, also 35 and competing in his fifth Games, is defending the 5,000m title that he has held since 2010 and looking to add to his men’s record haul of nine medals on the track.

Kramer’s selection was uncertain after he finished behind Patrick Roest and Jorrit Bergsma at the national trials in December, as the IOC has limited squads of nine men and nine women per country this year.

The ‘performance matrix’ used by skating association KNSB had Kramer ranked below sprinter Dai Dai N’Tab and 1,500m specialist Tijmen Snel, but he was given the nod on the basis of his experience.

Kjeld Nuis, who won the 1,000m and 1,500m in PyeongChang, is only competing in the longer distance this time around. He will face strong competition from world and European champion Thomas Krol, who also goes in the 500m and 1,000m.

Carlijn Achtereekte is defending her title in the women’s 3,000m, where she lines up against team-mates Irene Schouten and Antoinette de Jong. Schouten is also one of the favourites to win the 5,000m.

In the short track arena, Suzanne Schulting is competing in all five disciplines, including the 1,000m, where she won the Netherlands’ first short track gold medal four years ago.

Lining up against her is 20-year-old Xandra Velzeboer, whose aunt, Monique, won the 500m when short track was a demonstration sport in Calgary in 1988. Monique’s promising career abruptly ended five years later when a training accident left her unable to walk, but her niece has said she feels ‘no extra pressure’ from her surname.

In the men’s events, the 32-year-old Sjinkie Knegt will hope to end the run of dreadful luck that has restricted him to a silver and a bronze medal in his two Olympic outings so far.

The highly-rated Knegt’s career has been blighted by crashes and disqualifications at crucial moments, and more seriously a life-threatening accident with a wood burner in 2019 that left him with 30% burns.

Away from the skating track, Kimberley Bos will hope to improve on her eighth place in the skeleton bob in 2018, while Niek van der Velden and 17-year-old Melissa Peperkamp are contenders in the snowboarding.

Peperkamp, who will be the first Dutch competitor in action on Friday, threw down the gauntlet in the team camp when she told AD this week that her sport was ‘cooler than going round a skating track’.

Another 17-year-old, Lindsay van Zundert, is the lone Dutch representative in the figure skating competition and will also carry the flag at Thursday’s opening ceremony with skater Kjeld Nuis.