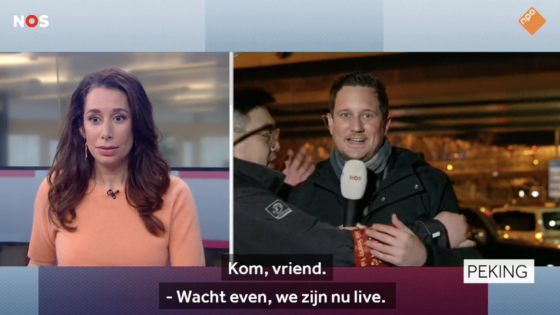 The International Olympic Committee has described an incident involving an NOS journalist and security official at the Winter Olympics in Beijing as ‘unfortunate’ and down to an ‘overzealous’ official.

The incident happened when reporter Sjoerd den Daas was doing a live insert into the national news live on television. The official is seen pushing Den Daas away from where he was standing while the reporter tried to explain, in Chinese, that it was a live broadcast.

IOC spokesman Mark Adams told reporters at the daily press briefing that the reporter was able to resume his work quickly. ‘These things happen sometimes,’ the spokesman said. ‘Hopefully it was a one-off.’

‘I think someone was being overzealous. He (the reporter) was able to, very quickly afterwards with the help of officials there, do his piece to camera.’

The media and participants are restricted to a ‘closed loop’ made up of the venues, media centre and their accommodation.

The spokesman also said the IOC had contact with NOS about the incident, although NOS said none of its team in Beijing or its editors and executives had spoken to anyone.

Den Haas said on Twitter later that he and other foreign journalists had been hindered in their work by police or stopped from making reports on games-related subjects in the past few weeks. ‘But it is rare during a live broadcast,’ he said.

Thanks to all who have been following the incident last night during the Beijing Olympic Opening Ceremony. I wanted to clarify some facts about what happened. https://t.co/nzk2p0DKhl

Den Daas and his team had been recording close to the Birds Nest stadium when they were asked by the police to move because the area was about to be closed off.

‘We followed those orders and prepared for our live interview at the place the police had directed us to, on the edge of the road closure,’ Den Daas said.

‘Shortly afterwards I was pushed away forcefully without any warning by a man in plain closes wearing a red badge which said ‘volunteer public safety’… they could not say what we had done wrong.’