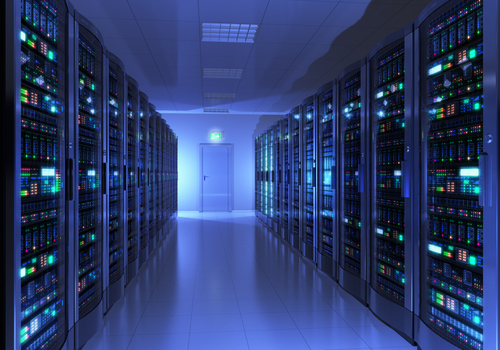 The interior of a server farm. Photo: Depositphotos.com

The Dutch government has imposed a nine-month moratorium on the building of new massive data centres for tech firms while new planning regulations are worked out.

In essence, the new rules will mean national government takes a central role in licencing new centres, which until now had been up to local authorities.

The decision does not impact on Facebook’s planned massive data centre, or hyperscale, in Zeewolde, which has caused major controversy because of its expected impact on electricity supplies.

Plans to build in two other locations – Eemshaven in Groningen (Google) and Middenmeer in Noord-Holland (Google and Microsoft) are also exempt from the moratorium because both areas are considered suitable locations.

Planning minister Hugo de Jonge is also looking into the option of confining new hyperscale centres to coastal areas, where they can be more easily connected to offshore wind farms – if there is enough scope for this.

‘Hyperscale data centres take up a lot of space and use an unreasonable amount of the available green energy,’ De Jonge said. ‘That is why the cabinet wants to prevent them being built all over the country.’

The moratorium applies to centres covering more than 10 hectares and which require more than 70 megawatts of electricity.

The Dutch Datacenter Association said in a reaction that the growth of digitisation requires a ‘robust digital infrastructure in which regional, private, national, international and hyperscale data centers form an important part’.

‘The Dutch government is currently the largest builder of data centers in numbers and is moving more and more services to the Cloud itself, because of the advantages in security, maintenance and energy use. The more IT services are centralised in larger data centres, the more efficient the energy use can be,‘ the lobby group said.

The Zeewolde project does not yet have the final green light because some of the land is owned by the state, which still has to set conditions for its use.