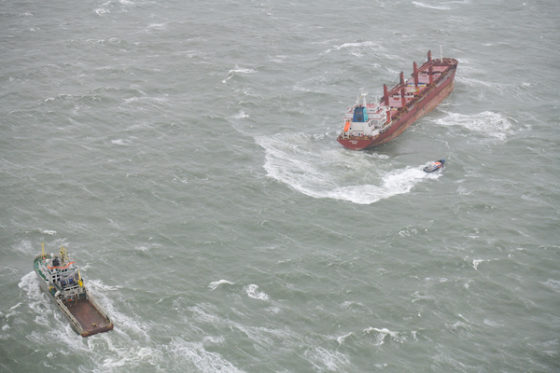 The Julietta D at sea, with tug boats near by. PHoto: Martens Multimedia ANP

The cargo ship Julietta D which broke free from its moorings during Monday’s gales and hit an oil tanker before drifting out to sea will be towed to Rotterdam port on Tuesday morning, the coast guard said.

Tug boat Sovereign managed to attach a cable to the stricken ship around 7pm on Monday night, allowing it to be stablised some 12 kilometres off the coast.

The coastguard said at the time they wanted to wait for calmer seas before towing the ship back to the Netherlands. Efforts to attach a second cable failed when the cable snapped, injuring two members of the coast guard. They were taken off the tugs on Monday evening.

The Julietta D was at anchor near IJmuiden in the morning but broke free in the high seas caused by storm Corrie and hit the Pechora Star oil tanker. The 18-member crew was evacuated by helicopter after it transpired the collision had caused a hole in the side of the German ship, which was taking in water.

The ship then drifted towards the Hollandse Kust Zuid wind farm which is currently under construction. According to one report, it may have hit the foundations of a platform where the electricity generated by the wind turbines will be brought together for transport to the mainland.

Storm Corrie blew down trees and disrupted air and train traffic as it blasted across the Netherlands on Monday, heading southwards as the day progressed.