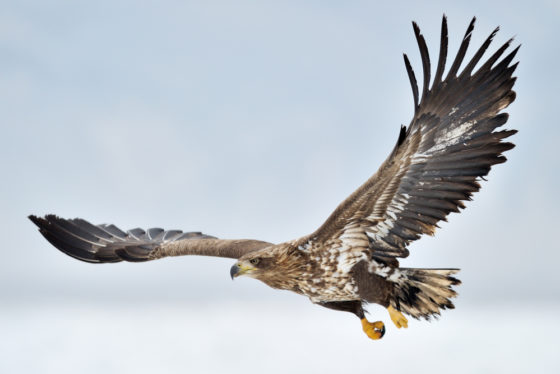 Another sea eagle which had been fitted with a GPS tracking device as part of a monitoring programme has died after being hit by the blade of a wind turbine in Flevoland, nature journal Nature Today reports.

The bird was one of fifteen young sea eagles born in the Netherlands and fitted with trackers in 2019, 2020 and 2021. Two other sea eagles have also died as a result of a collision with a wind turbine, and one was hit by a train.

The bird was found in a nearby field and had taken an hour to die, data from the tracking device showed. A sea eagle’s wing span can stretch up to 2.45 metres.

Following the death of a bearded vulture in Wieringerwerf last year, then agriculture minister Carola Schouten said the incident could have been prevented if a bird detection system had been in place.

However, the question of whether all turbines should have the system, plus a so-called black blade which would make the moving blade more visible to birds, was a matter for the provincial authorities, Schouten told MPs at the time.

Wind farm Krammer in the province of Zeeland, which is home to the osprey, is the only Dutch wind farm to use the system although the province of Groningen is currently  investigating the effect of black blades.

The loss of electricity caused by shutdowns amounts to €120,000 to €180,000 a year at the Krammer wind farm, project manager Gijs van Hout told local broadcaster Omroep Zeeland. ‘That is quite a lot. But we want the birds and the osprey in particular to stay in the area,’ he said.

Wind farms in Flevoland in particular should adopt the system, Nature Today said, because they are is situated in an area which forms a link between the Oostvaardersplassen nature reserve and the Veluwe lakes. Sea eagle pairs are increasing in the Netherlands and this means more will be navigating this route, the journal said.

In countries such as Spain and Portugal turbines have already been fitted with the warning system which stops the blades from turning if a large bird approaches. That has resulted in a 70% drop in deaths, Nature Today said.

The sea, or white-tailed, eagle made a successful come-back to the Netherlands in 2004 and there are now over a dozen breeding pairs.