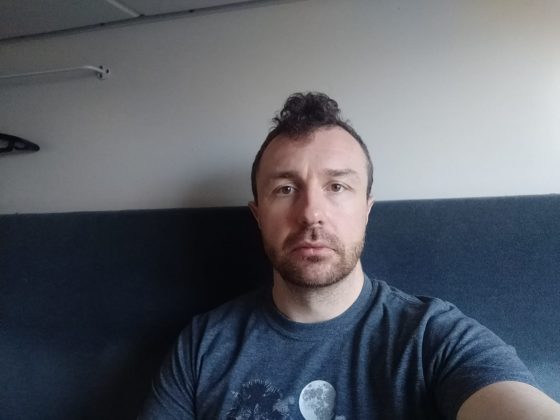 Andrii Degeler takes a selfie on the train

On the morning of February 24, as the Russian military attacked Ukraine, tech journalist and podcaster Andrii Degeler was on a train to Kharkiv, Ukraine, one of Russia’s early targets and a city whose residents were advised to stay inside.

Kharkiv is Degeler’s hometown, but he currently lives in Groningen with his wife and son. As he rode the train to his family home to retrieve an important document – and as he walked around his former city – Degeler told his one-time journalism teacher, Lauren Comiteau, what he saw around him.

‘I’m now walking from my in-law’s house to the train station. Fortunately, my family is mostly safe. My in-laws are with my wife and child in Groningen.

The whole point of me going to Ukraine now was to move my mum to a less dangerous place. I couldn’t take her straight to the Netherlands, because she doesn’t have a passport to leave the country. So, three days ago I moved her further west. One document we needed was missing, so I had to go back to Kharkiv to retrieve it from her house. And that’s what I did.

It turned out to be the most ridiculous timing for this trip. 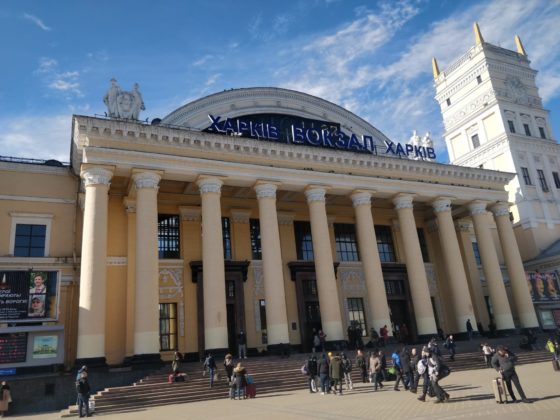 Outside the station. Photo: Andrii Degeler

I boarded my train yesterday [Wednesday] night from  the city of Khmelnytskyi in the west of the country. Things were as normal as they could be. No one really expected this kind of crap would happen.


I woke up around 6 am. The passengers next to me told me that the war and the shelling had started. We all started reading the news.

There were these few surreal hours when you know things are happening—that the war has started, the shelling is going on, there are fights reasonably close to where we are – but you can’t do anything. You just sit on your train and do nothing really. So those were really weird hours.

When I arrived, there were still dark news stories coming out. It’s interesting that a lot of people around here get their information not from websites but from channels on Telegram, the messenger app. It’s a really popular way of getting news in Ukraine now. A lot of channels are being updated by the minute, and you can follow what’s going on. This is what I’ve been doing.

I went about my business for a couple hours. I heard a pretty loud boom in the northern part of the city. I see a bunch of people queuing mostly for ATMS and gas stations. I see people with packed bags, waiting for intercity buses, but I have no idea where they’re going. Some of my friends have also left the city.

I’m not really worried right now about myself or my family. I hope I can get to the train station, board the train and get out of here. I’m mostly worried about the people and my friends who are staying here in Kharkiv as this seems to be one of more dangerous places at the moment. 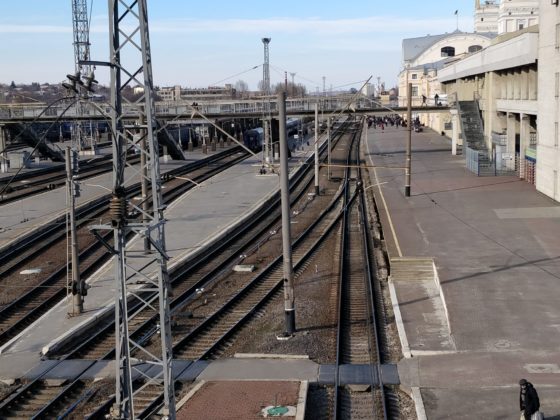 My train is delayed an hour, but I want to get to the station early to see what’s going on. The last train that was supposed to arrive an hour ago still hasn’t arrived.


The city is really quiet right now. There are very few cars. Normally on a working day at this time, this street would be full of traffic jams. Everyone hates this place! But there are very few cars now. I see a little bit of a line at the petrol station I’m passing, but it’s nothing like what I would have imagined from reading the news this morning. The gas stations don’t seem to be running out of gas in Kharkiv. There are two to three cars per pump, and things seem quite okay.

I’m coming to the bridge over the train tracks next to the Kharkiv train station. From here, I can see part of the city centre, the big church. Kharkiv is a beautiful city. Some wouldn’t say it’s a nice city, but I love it. It’s the place where I was born, and it has its own charms for sure. Sometimes I love to hate it, but this is the place I love. I now know that for sure.

I’m looking at the train station and I see at least one train moving. There is a regional train on the tracks and another intercity train further down. Things seem to be happening.

I’m in the train station now. There are a whole bunch of people here waiting for the train that still hasn’t arrived, but there’s no panic. 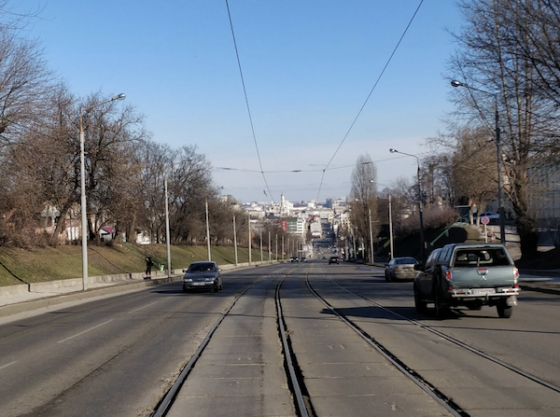 The roads in Kharkiv are quiet. Photo: Andrii Degeler

I have no idea when I’ll get back to the Netherlands. I will stay with my mum for now, and she has no travel documents so we have to get them first and then she will be able to enter the Netherlands. It will likely take at least a couple of weeks or maybe a month. We’ll see how things unfold.


It’s 3 pm local time now, and I have finally boarded the train out of Kharkiv. It just left the station. We are all going to Kyiv and likely further west from there. This whole thing is happening while the news reports fighting around the city. I heard a couple of loud booms when I was in the northern part of town. And I saw some military machines move around, but I haven’t seen any fighting within the city, and it looks like I won’t see the thousands departing by road.

I just really hope this war will end as quickly as it started, and I really hope Russia will just get the hell back out of my country, out of Ukraine, and then we’ll talk about what needs to be done for all the damage they have caused. This is fucking outrageous. No one could have ever believed this could happen.

Just a couple days ago, I thought we were overreacting, my wife and I, by moving our parents out of the border regions of Ukraine. Now I’m really happy we did that. And even though I will have to stay longer in Ukraine with my mum, it’s not going to be in a dangerous place, and I don’t have to transport my mother under artillery fire and shelling coming from the Russian Federation side. I really hope for the best, and I really hope we can all survive this and see this whole thing end.’