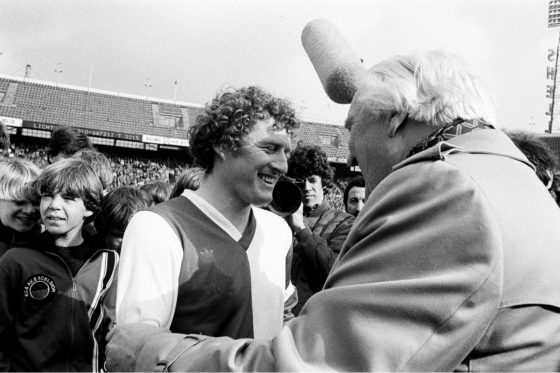 Wim Jansen after his last match as a player for Feyenoord in 1980. Photo: ANP/HH/Ronald Speijer

Wim Jansen, a key member of Feyenoord’s European Cup-winning side in 1970, has died at the age of 75.

The midfielder was also part of the Dutch squad that reached the 1974 and 1978 World Cup finals. As a manager he won league titles with Feyenoord and in Scotland with Celtic – Feyenoord’s opponents in the 1970 final – ending a nine-year title-winning streak by their Glasgow rivals Rangers.

A biography of Jansen published last year revealed he had recently been diagnosed with Alzheimer’s disease.

Johan Cruyff described him as ‘one of only four people in the world who are worth listening to when it comes to football’ and his knowledge of the game was widely respected.

Biographer Yoeri van den Busken said: ‘It was sometimes said that Jansen was Cruyff’s hard drive. Jansen wrote down what Cruyff had in his head. But many people don’t know that because he always stayed in the shadows.’

Born in Rotterdam, Jansen played a total of 426 matches for Feyenoord from 1965 to 1980, before spending the last two years of his career at Ajax and the Washington Diplomats.

His first match for Ajax was in December 1980 against Feyenoord, whose enraged fans heckled him as a traitor. He was taken off after 18 minutes when he was struck in the eye by an ice ball hurled from the stands that left him with a damaged cornea.

His coaching career began at Feyenoord and he returned to his home town club in 1990, winning the KNVB Cup twice and the league title in his final season of 1993.

After falling out with club executives he coached in Saudi Arabia and Japan before joining Celtic for the 1997-1998 season. As well as securing Celtic’s first league title for a decade, Jansen signed Feyenoord’s Swedish striker Henrik Larsson, who went on to become a club icon in Glasgow, scoring 242 goals in 313 matches.