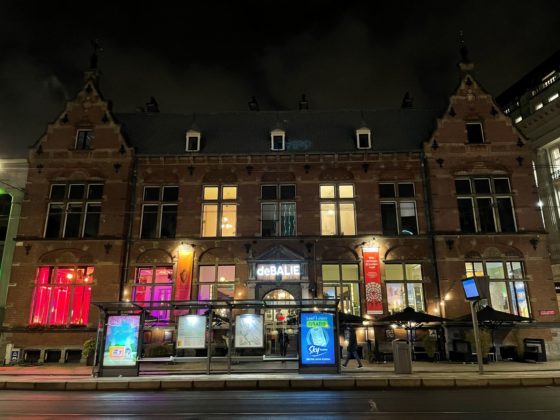 The heart of Amsterdam’s nightlife district was dead, but inside the doors of De Balie on Friday night, a new kind of faith-based service was going strong.

Fifty brave souls signed up to the first communion of The Philosophical Society; the Community of Reason, a new denomination registered at the Chamber of Commerce this week.

Its purpose, apparently, is to celebrate life, real-life debate and performance…on this occasion, with the help of three comics and a compere (sorry, ‘pastor’). Although the audience signed a large visitor book in order to join the community, they were asked not to take photographs and to show proceedings all due respect.

‘The Philosophical Society; the Community of Reason is about democracy and the rule of law, the solace and consolation of culture, experiencing something together that culture can give and seeing a bit of light after two years of darkness,’ said Yoeri Albrecht, director of De Balie.‘You are witness to the first meeting. Since the society believes in experiencing culture, laughing and enjoying each other, the first meeting is a comedy night.’

Free tickets to the event, complete with social distancing, QR code checks and face masks, were available on Thursday and sold out within an hour, according to a press spokesman.

He said that Amsterdam city council had told them it would not enforce a shutdown but was expected to monitor the evening.

De Balie, in a former 19th century court building, normally functions as a space for political events, debates, talks and entertainment. In its new faith-based role, it is to be a space for open, social debate that is ‘better not on the internet’ or controlled by algorithms, according to its online manifesto.

Audience member Lena Liachenko, who spent 27 years as a tour guide in Amsterdam, pointed out that previously refugees have been able to find sanctuary in Dutch churches and said the idea was ingenious.

‘People are finding it isn’t possible to live like this,’ she said. ‘There is complete depression in the country and we don’t understand why everything is closed. It’s a medieval idea that when you got into a church, you were safe. This is typically Dutch and I want to support it.’

Some of the content of the first night revolved around lockdown experiences – the idea, for example, that Netflix show seasons might be less interesting than the world outside with its four seasons, even though they are on constant repeat.

And although the first joke was about Dutch ‘boa’ wardens busting the joint, the only explosions in this first ‘service’ were of cathartic laughter.