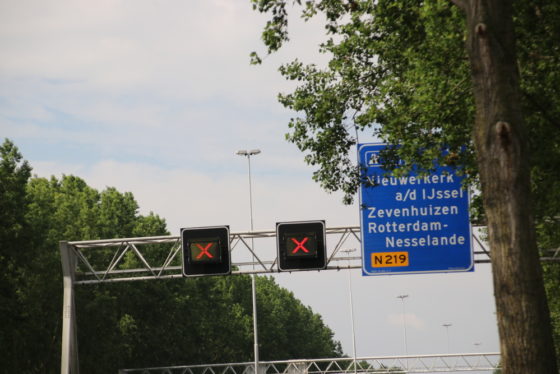 Highways agency Rijkswaterstaat issued a record number of fines last year to drivers who ignored red crosses above the road, indicating a lane has been closed.

Spokesman Diederik Fleuren told NOS that there were nearly 40 collisions with maintenance vehicles and buffer trucks – padded trailers that provide cover for teams working on the road – last year, almost twice as many as in 2020.

‘We see it every day, people who think they can just nip into the lane. But meanwhile there are probably people at work, for example to clear an accident. There might be debris on the road. These are potentially dangerous situations.’

Rijkswaterstaat also handed out 507 fines for breaking waterway regulations, nearly three times as many as in the previous year.

Canals, lakes and reservoirs were busier than usual as people took holidays at home during the pandemic, Fleuren said. ‘But here as well you saw people not observing the rules.’

Common offences included speeding, driving without a licence and not wearing a dead man’s cord, which cuts the engine if the driver leaves the wheel, in high-speed areas. Other people were fined for standing up at the wheel without wearing a lifejacket, as the law requires.

Fleuren said many hire vessels can be driven without a navigation licence. ‘But people are expected to know the law, and I fear that a large number of people haven’t looked into it.’