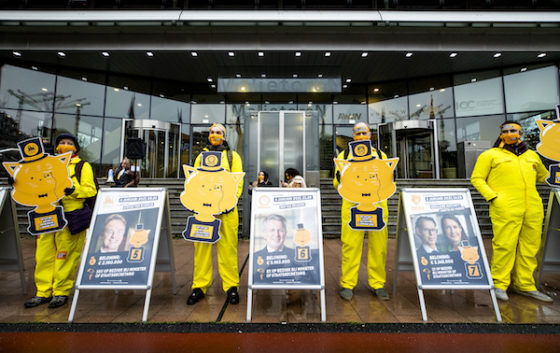 Trade union federation FNV is continuing its campaign to get minimum pay rates increased, despite the new government’s pledge to boost it by 7.5% over four years to just under €12 an hour.

‘This is still well below the amount needed to live on which is some €14 an hour,’ FNV spokeswoman Petra Bolster told the Financieele Dagblad on Friday.

The union has designated January 7 as Fat Cat Day, a concept initiated in Britain and which focuses attention on the gap between board and shop floor wages. It says that the chief executives of 14 of the Netherlands’ biggest companies had earned the equivalent of a full year’s salary at minimum pay rates by the end of the first week of the year.

Top of the list is Philips CEO Frans van Houten who has an annual pay package worth €6.4m. This means that by 6.45 am on January 2, he had earned the equivalent of the minimum wage for an entire year. Ahold’s Frans Muller and Ben van Beurden from Shell were close behind.

On Friday, Rabobank’s Wiebe Draijer and Herna Verhagen from PostNL joined the list. Their earnings are around €1.2m.

‘More than one million people work at or just above the minimum wage,’ Bolster said. ‘This is a stark contrast to the millions of euros in profit made in the Netherlands in those sectors. Employees who earn around the minimum wage have often borne the brunt of the coronavirus crisis, while large companies such as Ahold, Randstad and PostNL have actually been able to benefit. ‘