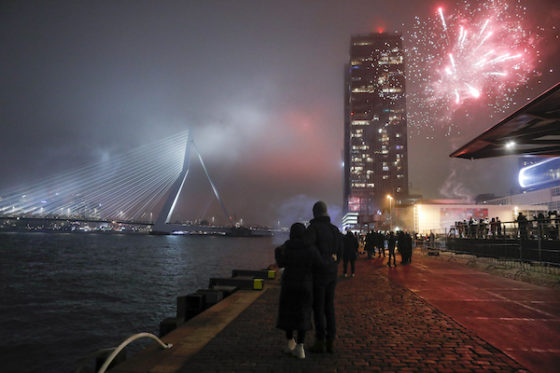 Fireworks over Rotterdam, but it was quiet on the streets. Photo: Bas Czerwinski ANP

The Netherlands saw in the New Year with rockets, firecrackers and street parties, despite the ban on most fireworks and on large gatherings.

Police said on Saturday morning that it had been a ‘busy night’ which was ‘only kept under control by the use of considerable police capacity.’  According to the Telegraaf, there were more call outs of the emergency services than in 2020.

As every year, riot police were drafted in to deal with disturbances and to protect ambulance workers and firefighters, particular in the more rural parts of the country.

In the Drenthe village of Bovensmilde, riot police were in action for several hours to break up groups of youths throwing fireworks. There were similar incidents in at least five villages in Friesland, including Burdaard – where tear gas was used – and in Tzummarum and Kollumerzwaag.

In Groningen four people were arrested for throwing fireworks at emergency service workers, but there were only 13 arrests in total in the three northern provinces, broadcaster NOS reported. 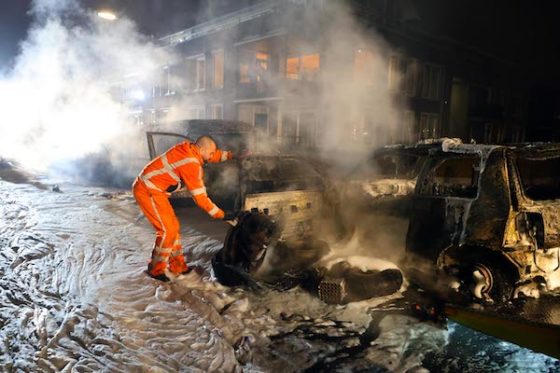 In Noord Holland, police said there had been 32 arrests, including 17 for arson and illegal fireworks. In Amsterdam, a crowd of some 3,000 to 4,000 had gathered on the Dam in the city centre to celebrate the New Year, and riot police were drafted in to clear the area.

Local broadcaster AT5 said riot police were also brought in to restore order in Amsterdam Nieuw-West.

Elsewhere cars were set on fire in Rotterdam, Utrecht and The Hague and in Rotterdam, gangs of youths threw fireworks at police as they tried to put out a blaze at a school.

There were also a number of arrests in Arnemuiden in Zeeland after groups of youths starting setting fires.

Anyone want to take a guess about how many of those 1,000 Euro fines were handed out in Leiden last night? Here’s how the Oude Singel looked in the “firework free center” last night around midnight (turn the sound on to get the full experience). #vuurwerk #Leiden pic.twitter.com/ptZc25pIWf

Police chief Willem Woelders said every attack on emergency service workers was to be regretted. ‘But our preparations over the past few months have enabled us to be there on time if there were problems. Thanks to this, nowhere did the situation really get out of hand.’

Despite the ban on fireworks and the large number of seizures in recent weeks, a surprisingly large amount of fireworks were set off, he said. ‘Cars were also set on fire nationwide and the police broke up illegal parties all over the country. But this did not lead to major problems.’

Rotterdam’s specialist eye hospital had dealt with three cases by Saturday morning, compared with 10 to 15 in a normal year. None of the patients were seriously injured, NOS said.

Some people were injured by fireworks. RTV Rijnmond said a man had lost a hand when a firework blew up, while in Berkel en Rodenrijs a man received a serious foot injury after a firework rolled towards him.

The complete injury figures will be published on Wednesday, broadcaster RTL Nieuws said.