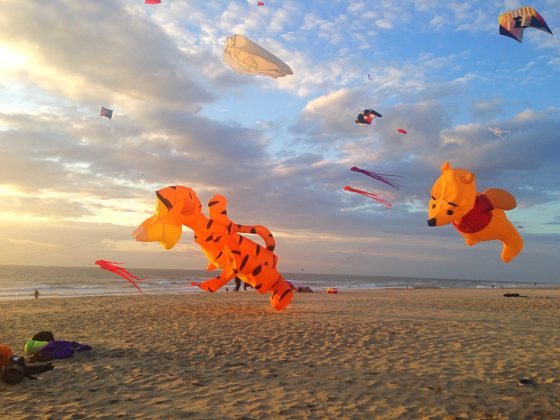 Blowing the cobwebs away on a windy beach. Photo: Sandra Koot

Once again, an American newspaper has published an article about a European lifestyle trend – this time picking up on the Dutch word uitwaaien, which basically means going out for a breath of fresh air.

‘Forget hygge, it’s time for uitwaaien,’ is the headline on the Washington Post’s article in the travel section, referring to the Danish art of getting snug and cosy at home.

The paper quotes bar owner and prize winning cocktail maker Tess Posthumus, who goes surfing in winter, as a prime example of a practitioner of uitwaaien. ‘The fresh, salty air helps clear your head a lot,’ Posthumus told the paper.

Not everyone commenting on the article was convinced, however. ‘I’m not a xenophobe but I get annoyed by these attempts to demonstrate how foreigners, often Northern Europeans – more often the Dutch, have figured out some deep secret to life when they are engaging in activities that many of us have partaken in how our whole lives,’ wrote Ham on Wry.

The Dutch too are perplexed by the new craze. ‘Is this satire?’ asked one person on Twitter. ‘Although I am very fond of the word uitwaaien, anglophone news websites have to stop taking random foreign words and call it a ‘lifestyle’,’ commented Muurts.

‘Hurray! The Netherlands are mentioned in another silly foreign newspaper article! So proud,’ said Jochem Wiers on Twitter.

Dutch News contributor Molly Quell also mocked the article on Twitter, pointing out that the American media’s fixation with supposed European lifestyle trends is part of a broader refusal to acknowledge that quality of life issues in the country would better be addressed by structural changes.

I am literally begging American media to stop writing about some random European word as the explanation for the better quality of life on this side of the pond.

It’s healthcare and workers’ rights. That’s it. That’s the explanation.

Of course, taking a walk outside to improve your well-being isn’t a uniquely Dutch tradition.

The Washington Post itself has published at least six stories in the past few years advocating taking a walk outdoors to help cope with stress and improve your outlook, including this 2018 article which tells readers to take their newborns with them on their walks. In fact, the advice to go for a walk for one’s mental health is so common, there’s a TikTok trend called the #stupidwalkchallenge mocking it

Uitwaaien is not the first Dutch ‘craze’ the foreign media have identified either. Niksen – or the Dutch art of doing nothing – has been the subject of at least three books, one of which was written by a Dutch person who said they hoped it would become a real lifestyle habit.

‘It was international news… but people were asking each other ‘do you know what this is about?’, worried they might have missed something,’ said journalist Maartje Willems in her book. ‘No, no-one knew about it.’

Then the New York Times in 2019 wrote about the apparent Dutch habit of dropping – or dumping children in the forest at night and expecting them to find their way home – sparking worldwide attention for a scouting ritual which most parents have never heard of.

And in 2018, the Dutch prowess at speed skating was said by American broadcaster Katie Couric to be partly down to the fact they skate to work in winter – which they don’t, thanks in part to global warming.

She was, however, not the first to make the mistake. After the Dutch swept the board several times at the Sochi Olympics in 2014, the International Business Times made the same suggestion.

‘In winter months, skating is a sensible form of transportation, as commuters skate along frozen canals to visit family or friends who live many villages away. Much of the country sits below sea level, so it’s frequently not a particularly arduous journey to travel by skates,’ the website said.

Perhaps the search for new lifestyle trends has been prompted by coronavirus, which has kept people at home and restricted their activities.

Dutch tv fitness guru Arie Boomsma told the Washington Post in its uitwaaien article that during the pandemic, ‘it’s just become a thing to go outside, get some fresh air.’

‘There’s not much allowed aside from walking, running and biking. People just gave a whole new meaning to the term. Now it’s urgent,’ he said.

International news agency Reuters is also in on the act. Last week it came up with yet two more Dutch ways to cope with coronavirus – screaming on the beach and smashing up cars to vent your anger.

For the record, DutchNews.nl wrote about gezelligheid replacing hygge in 2017.