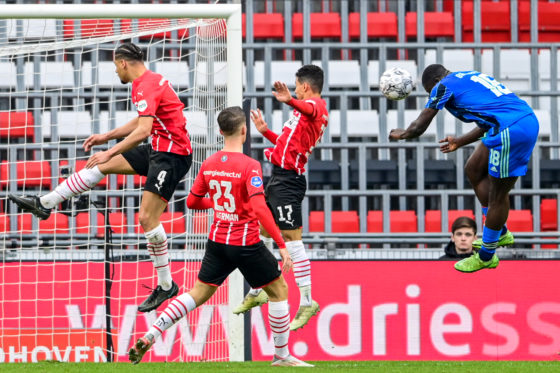 Ajax overtook PSV at the top of the Eredivisie as Noussair Mazraoui’s long-range winner proved the difference in a tense top-of-the-table clash.

The champions went ahead in Eindhoven when Brian Brobbey headed in Dusan Tadic’s cross in the 34th minute for his third goal in two matches.

Ajax suffered a blow when the on-loan striker limped off injured minutes later, and early in the second half conceded an equaliser when Mario Götze punished a defensive lapse by Jurriën Timber.

PSV looked to have done enough to preserve their one-point lead at the top of the table until Mazraoui fired in the winner in the 74th minute.

Feyenoord moved to within four points of Roger Schmidt’s side in third place with a 4-1 win at NEC, including two goals for Orkun Kökcü. Veteran midfielder Lasse Schöne had given the home side an early lead in the 17th minute.

Groningen grabbed a valuable win in the Gelredome against Vitesse Arnhem, who had their top scorer Lois Openda sent off in the first half for using his elbows on Mike te Wierik.

Jorgen Strand Larsen headed the northerners into the lead just before half-time, before an own goal and a smart finish by Daniël van Kaam sealed the points in the second half.

Vitesse’s setback and a 0-0 draw for AZ Alkmaar at home to Cambuur allowed Twente Enschede to move up to fourth place with their sixth win in nine games. Michal Sadilek’s goal was enough to see off Willem II, who lost for the 10th straight Eredivisie match.

PEC Zwolle can dream of a great escape after they won for the second week in a row. Captain Bram van Polen scored the only goal from the penalty spot to claim PEC’s first away win for nine months at Heerenveen.

RKC Waalwijk moved away from the drop zone with a 2-1 win at home to Fortuna Sittard, while Sparta went down 3-0 at home to Utrecht.

Heracles missed several good chances at home to Go Ahead Eagles, but were unable to add to Kaj Sierhuis’s 32nd-minute strike. Swedish striker Isac Lidberg equalised for Go Ahead in the 73rd minute.

The build-up to the match was again dominated by questions about the future of midfielder Rai Vloet following his involvement in a fatal car crash before Christmas. Club director Rob Toussaint said Vloet would never play for the club again.