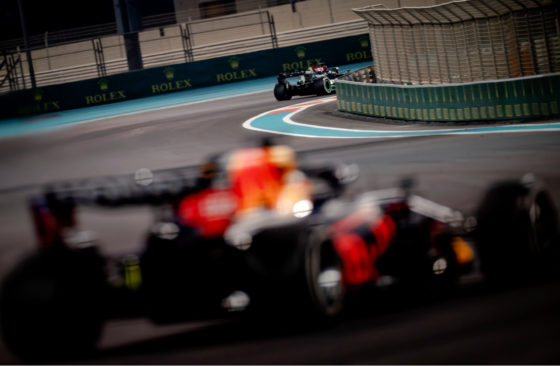 Max Verstappen was behind Lewis Hamilton for 57 of 58 laps. Photo: ANP/Remko de Waal

Max Verstappen is the Formula One world champion after passing Lewis Hamilton on the final lap of a dramatic last Grand Prix race in Abu Dhabi.

Hamilton looked to be cruising to victory – and a record eighth world title – with four laps remaining when Nicholas Latifi crashed into a wall.

Red Bull quickly called Verstappen in for a new set of faster tyres, and when the race resumed with one lap to go he was able to pass his rival and drive to the chequered flag.

Mercedes will be aggrieved at the way the race directors handled the final laps, with lapped cars allowed to overtake the safety car and give Verstappen a clear run at Hamilton.

Verstappen started the race on pole position, but surrendered his lead at the first corner as Hamilton was fastest off the line.

The Dutchman looked to have edged ahead at turn 6, but Hamilton ran off the track to retain the lead. Red Bull protested but the race directors decided Verstappen had forced him wide by braking too late.

Hamilton slowly built a six-second lead, but when the virtual safety car was deployed on lap 36 Red Bull quickly called Verstappen in for fresh tyres, giving him 20 laps in which to make up a 17-second deficit.

It looked as if the Dutchman would fall short as he could only cut back seven seconds, but Latifi’s crash wiped out the advantage and Red Bull changed Verstappen’s tyres again, setting up a nail-biting final lap.

‘Throughout the whole race I kept fighting then there was the opportunity in the last lap, it’s incredible,’ Verstappen said. ‘Our goal was to win this championship when we came together and now we have done that.’

Mercedes’s pit team were left fuming at the decisions made in the closing stages by Formula One race director Michael Masi, who allowed five lapped cars to overtake the safety car just before it left the track.

Team boss Toto Wolff said the positions on lap 54 should be reinstated, which would have given Hamilton the title, but Masi retorted: ‘Toto, it’s called a motor race. We went car racing.’

Hamilton congratulated Verstappen and the Red Bull team, before paying tribute to his own colleagues.

‘I think we did an amazing job this year,’ he said. The team, everyone back at the factory, all the men and women we have, worked so hard all year in a difficult season. I am so proud of them.’

He added: ‘I hope everyone stays safe in the pandemic and has good Christmas during this time and we’ll see about next year.’