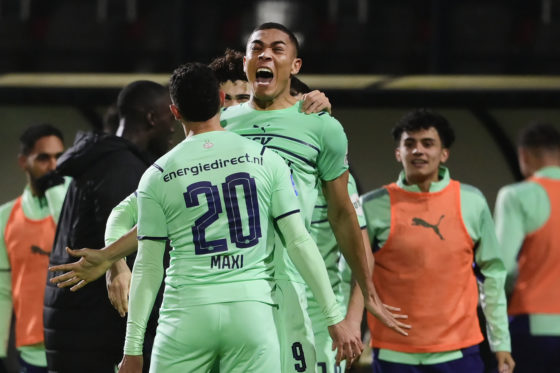 PSV Eindhoven have gone top of the Eredivisie, a point clear of Ajax, following a dramatic late comeback against NEC Nijmegen.

Carlos Vinicius tapped in a 90th-minute winner for PSV, 10 minutes after substitute Yorbe Vertessen had headed in an equaliser as Roger Schmidt’s side piled on the pressure. NEC had led since the eighth minute when Magnus Mattson tucked away the rebound from a Lasse Schöne free-kick.

Feyenoord missed the chance to go top as they could only manage a 1-1 draw in Groningen. The visitors went ahead when Marcos Sensei deflected a shot by Gernot Trauner into the net, but five minutes later Jørgen Strand Larsen lobbed the ball over Justin Bijlow for the equaliser.

Vitesse Arnhem moved up to fourth place with a 2-1 win at home to Heracles, Loïs Openda scoring both goals after the visitors had taken a first-half lead through Nikolai Laursen.

FC Twente got off to a flying start against RKC with goals in the first five minutes from Ricky van Wolfswinkel and Michel Vlap. RKC quickly pulled one back through Jens Odgaard but Twente had the better chances in the second half and RKC’s miserable afternoon was completed when Shawn Adewoye was sent off in the 89th minute.

Bottom club PEC Zwolle fell further behind after losing to fellow strugglers Fortuna Sittard. A mistake by goalkeeper Kostas Lamprou proved fatal as he fumbled the ball into the path of Nigel Lonwijk, who secured Fortuna’s first league win since mid-October.

The win took Fortuna above Sparta, who drew 0-0 at Heerenveen. A goalless draw was also the outcome between Utrecht and Go Ahead Eagles, pushing the side from the cathedral city down to sixth place.

Willem II’s slide down the table continued as they suffered their seventh defeat in a row to Cambuur. The Frisian side wore T-shirts with messages of support for their coach Henk de Jong, who is undergoing treatment for a benign tumour.