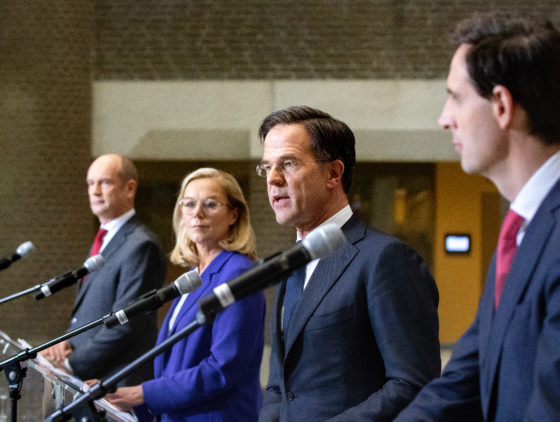 Mark Rutte (second right) and the other party leaders at the presentation. Photo: Dirk Hol ANP

The coalition agreement for the new cabinet was presented on Wednesday afternoon, nine months after the general election and 11 months since prime minister Mark Rutte resigned on behalf of his entire ministerial team.

The government fell in the wake of a highly critical report on the tax office’s aggressive pursuit of families who were suspected of fraudulently claiming childcare benefit, sometimes because of minor administrative errors.

Wednesday’s agreement said ‘generous compensation and emotional redress’ were needed, though it also warned that the process would last at least until 2023. The government will also fund 95% of childcare directly rather than asking parents to reclaim the costs.

‘We have the ambition to abolish the allowances system so that people no longer lose their way in the complicated regulations or are faced with large demands for repayment,’ it said.

The minimum wage is being raised by 7.5%, while the government wants to close the gap between employees and freelance workers through measures such as part-time unemployment insurance and work incapacity cover for the self-employed.

Two long-term funds worth €60bn are being set up to tackle climate change and reduce nitrogen compound emissions, with the aim of cutting greenhouse gas emissions by 55% of 1990 levels before 2030.

The government is spending €35bn on the transition to renewable energy by subsidising better insulation in homes, more infrastructure for electric cars, and investing in hybrid water pumps.

The controversial ‘pay-as-you-drive’ car tax scheme – an idea discussed by politicians in The Hague for the last 30 years – is enshrined in a coalition agreement for the first time, but will not come into effect until 2030.

The nuclear plant in Borssele will be kept open and there are plans to build two new plants. The government also hopes to open Lelystad airport by 2022 and develop synthetic kerosene for aeroplanes so the Netherlands can become a pioneer in green fuels.

Plans to tackle the housing crisis include building 100,000 new homes a year, including 15,000 units for students, labour migrants, homeless people and those in urgent need. The landlords’ levy is being abolished to encourage social housing corporations to invest in building more rental homes, and the €100,000 tax-free gift from parents to invest in a house is being abolished.

On education, the cabinet will reintroduce student grants from 2023/24 with a two-tier system made up of a universal basic grant and an additional grant based on income.

The document also says there is ‘no place for institutional racism in our society’ and says the cabinet will take action against ethnic profiling. There are also plans for anonymous applications and hotlines to report discrimination at jobs or housing agencies.

Johan Remkes, the veteran former minister who led the last stage of the talks, said the process had been ‘excessively long’ and tested the country’s patience. ‘This is an important moment, because our country is urgently in need of a cabinet with a mandate,’ he said.

Parliamentary chairwoman Vera Bergkamp, who received the 50-page document in the lobby of the parliament building, said she hoped ‘trust in politics can be restored’ now a government was in place.

Bergkamp was critical of the way details of the incoming government’s plans were communicated and leaked to the press. ‘We read a lot in the media that parliament was only informed about afterwards,’ she said.