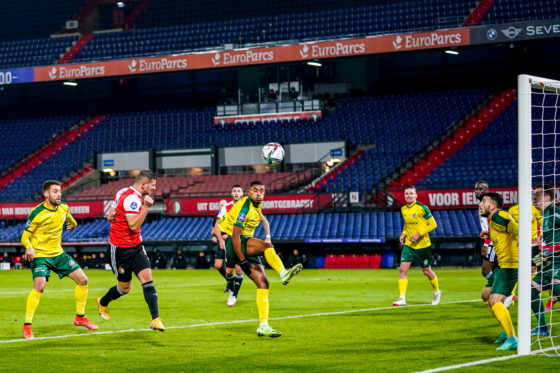 Feyenoord kept up the pressure on Eredivisie leaders Ajax by cruising to a 5-0 win over struggling Fortuna Sittard on Sunday to close the gap to one point.

Two headed goals by 5ft 7in striker Bryan Linssen, who also contributed two assists, took his total for the season to 10, making him the division’s leading scorer ahead of team-mate Guus Til.

Linssen could have had a hat-trick had he not miscued another header into the path of team-mate Luis Sinisterra, who volleyed it home for the fourth goal. ‘I should really say I intended it, but if I’m honest I connected badly with my head,’ Linssen said afterwards.

PSV Eindhoven remain a point behind Feyenoord after they came back from conceding an early goal to Utrecht to run out 4-1 winners. Cody Gakpo scored the equaliser in his first appearance following a six-week absence with an ankle injury.

Ajax set the pace on Thursday night with a commanding 5-0 win over Willem II, with Antony hitting a long-range strike after 10 minutes to open the scoring.

Vitesse Arnhem swept aside Cambuur to move up to fifth with a 6-1 win in Friesland, with Loïs Openda scoring twice and Maximilian Wittek contributing three assists.

Go Ahead Eagles went ahead against Twente when Inigo Cordoba lashed in a shot from a corner, but late goals from Ricky van Wolfswinkel and Ramiz Zerrouki claimed the points for the visitors.

AZ Alkmaar continued their recovery as Jesper Karlsson struck twice, including a penalty, and laid on the third goal for Vangelis Pavlidis to inflict more misery on Sparta.

RKC Waalwijk’s new signing Roy Kuijpers had a dream start to his professional career as he slotted in an injury-time winner against NEC Nijmegen. The 21-year-old was able to move outside the transfer window because he was playing as an amateur for Den Bosch until last week.

A strike by Joey Veerman was enough to earn Heerenveen the points against Heracles, while bottom club PEC Zwolle were denied a second win of the season in Groningen when defender Thomas van den Belt headed into his own net from a corner.