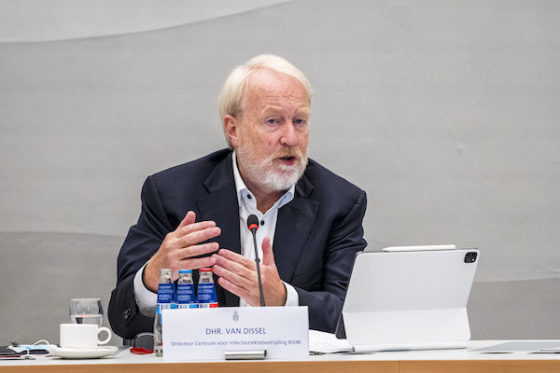 If the Netherlands had started giving booster vaccinations earlier, fewer people who have been vaccinated would have ended up in hospital, Jaap van Dissel, head of public health institute RIVM, told MPs on Wednesday.

‘Yes, I think we could have prevented some of them,’ Van Dissel said in answer to MPs questions. The high infection rate is also partly due to slight decline in effectiveness of vaccines in ‘relatively many’ of the frail elderly, he said. ‘We have to raise this with boosters.’

The Netherlands has been very slow to start its booster campaign, and so far only 82,000 people have been given a third jab. However, it is important not to give a booster shot too quickly because its impact is greatest six months after full vaccination, Van Dissel told MPs.

Hospital chief Ernst Kuipers also highlighted the importance of the booster jabs in his appearance before MPs. ‘The quicker we can boost the over-60s and people with prior health problems, the quicker their hospitalisation rate will go down,’ he said.

Kuipers also said he expects hospitalisations to peak at around 3,200 within two weeks. Currently, some 2,800 people are being treated for coronavirus in hospital.

Meanwhile, RIVM experts have told news website Nu.nl that stabilisation in the number of new infections in the Netherlands is unconnected to capacity problems at some testing centres, as has been suggested.

Both the percentage of tests proving positive and the reproduction rate have gone down slightly, which shows there is movement, experts said.

In addition, testing centres are not yet at maximum capacity, even though it can be hard to make an appointment at peak periods, a spokesman for the regional health board association told Nu.nl.

Everyone who wants to be tested can be, although some people may have to opt for a different time or location, the spokesman said.