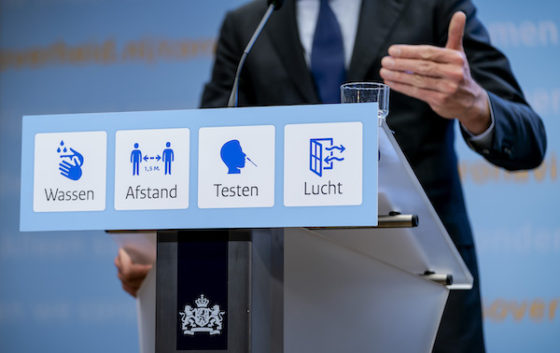 The Netherlands is to start giving people coronavirus booster vaccinations more quickly and cutting the time lag after the last regular dose from six months to three.

This means that everyone over the age of 18 will have been offered a booster jab by mid January, health minister Hugo de Jonge told a press conference on Tuesday evening.

The decision to embark on this ‘mega operation’ has been taken because of the uncertainty created by the Omicron virus, De Jonge said. ‘We are speeding up the booster because it is really needed for Omicron,’ he told reporters.

So far, over 80% of the over 80s have been given a booster, but the general take-up rate has been around 65%, De Jonge said.

‘We are also really concerned about the 11% [of Dutch residents] who have not yet been vaccinated at all,’ he said. ‘Even if Omicron causes milder illness, it is moving so fast that there will be an impact on hospital admissions.’

Government health advisors will report back on Friday if additional measures are needed to combat the spread, based on the latest research on the Omicron variant. ‘We don’t know enough about it yet,’ De Jonge said. ‘But it is more resistant to immunity and a new wave is to be expected.’

De Jonge said Omicron now accounts for around 1% of cases in the Netherlands, and 3% in Amsterdam.

As expected, the government announced that the current measures – including the 5pm closure for cafes, bars and cinemas – would be extended until January 14 and that primary schools would close a week before Christmas. It is expected that this would mean closing next Monday, or Tuesday. This is to give them time to organise care for children of essential workers.

The decision has been taken because of the spread of coronavirus under school children and the need to protect elderly relatives, prime minister Mark Rutte said.

‘We realise that this will have an impact on children, as well as families,’ he said. ‘But I would ask parents not to use the emergency childcare service unless there is no alternative and not to ask granny and granddad to look after the children either. And I realise how much we are asking of parents, teachers and employers.’

The prime minister also said he could not guarantee that the schools would reopen as planned from January 10.

Rutte went on to reiterate the ‘urgent advice’ that people have no more than four guests at home during Christmas.

‘We have to be careful, even though this is the time of year when our need to see each other is greatest,’ he said. ‘And we have to limit contact between the over-70s and children. That means no cuddling the grandchildren under the Christmas tree.’

Rutte also commented on research last week which showed that support for the government’s coronavirus measures is at an all time low. ‘You could say it is logical because everyone has had enough,’ he said. ‘But I see it as an order to do better.’

On the other hand, the research shows that people are still prepared to stick to the rules, and they realise that their behaviour has an impact, he said.

The current package of measures remains in operation until January 14 at least. However, Rutte said, new measures could be brought in earlier. ‘There is reason for concern,’ he said. ‘We need to prepare.’

Asked about changes to the current travel advice, Rutte said that the government’s Outbreak Management Team would include any potential changes in its recommendations, which will be published on Friday.

‘Within Europe, I do consider it important that we work together as a whole,’ Rutte said.