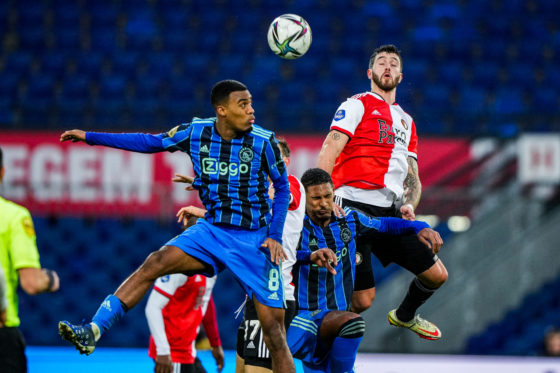 Ajax prevailed in a gritty Klassieker against Feyenoord in Rotterdam to keep within a point of league leaders PSV at the halfway point of the season.

In a match where yellow cards were more prominent than chances, the visitors took the lead just before half-time when Marcos Senesi diverted a cross into his own net.

Dusan Tadic scored the second from the penalty spot following a clumsy challenge by Reiss Nelson on Devyne Rensch.

Feyenoord coach Arie Slot acknowledged that his team had found it tough to find their rhythm against the champions. ‘The next step we have to take is to be better on the ball against this kind of defence, but I saw in the second half that we were slowly starting to do that.’

PSV eased past RKC with a 4-1 win, including two goals by Yorbe Vertessen, who joined the action as a first-half substitute after Bruma pulled up with a hamstring injury. Ritsu Doan also left the pitch early after a clash of heads with RKC’s Alexander Büttner.

Twente moved up to fourth with a 3-1 win at bottom club PEC Zwolle, who are now six points off the pace after Sparta snatched a point against Vitesse thanks to two late goals from Sven Mijnans.

The first top-flight Frisian derby for more than six years was won by Heerenveen thanks to two goals from Henk Veerman, the first from the penalty spot after 10 minutes. Roberts Uldrikis replied for the home side midway through the first half with a glancing header, but Veerman’s head supplied the winner seven minutes from time.

AZ won their fourth match in a row to climb to sixth at the expense of Willem II, who extended their losing streak in the league to seven matches. They displaced Utrecht, who could only draw 2-2 with lowly Fortuna Sittard.

In a clash of two promoted teams, NEC won 2-0 in Deventer to overtake Go Ahead Eagles in 10th place, thanks to a well-placed strike by Elayis Tavsan and a Jordy Bruijn penalty.

Heracles ended a run of four straight losses against Groningen as Orestis Kiomourtzoglou and Nerayshou Kasanwirjo struck in the last five minutes, after the visitors looked to have earned a draw with Romano Postema’s header in the 78th minute.