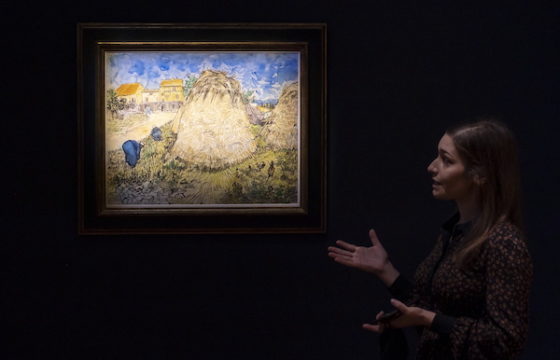 A water colour by Vincent van Gogh seized by the Nazis during World War II has been sold to an undisclosed buyer for a record breaking $35.85m (€31m) at auction house Christie’s on Thursday.

The work formed part of the Cox collection of Impressionist and post Impressionist painters which also included two other works in oil by the Dutch artist, which fetched €62m and €40m.

Christie’s expected the collection to raise around €200m but closed the auction with a final tally of over €300m. Most of the paintings exceeded their original estimates by a significant margin.

Meules de blé (Wheat stacks), painted in Arles in 1888, was bought by German collector Max Meirowsky in 1913. The Jewish collector sought refuge from the Nazis in Amsterdam and gave the work to a German art dealer in Paris for safekeeping.

It was sold on to a member of the Rothchild family but confiscated by the Germans in 1940. Nothing was heard of the work from that time until it resurfaced as the property of oil tycoon Edwin Lochridge Cox who bought it from the Wildenstein Gallery in New York in the late 1970s.

The sale at Christie’s could go ahead following a deal between Cox’s heirs and the heirs of two Jewish art collectors who owned the work prior to its confiscation.

The last time Hooischelven, its title in Dutch, was exhibited was at the Amsterdam Stedelijk Museum in 1905. It is unknown if the Van Gogh Museum entered into the bidding for any of the works.

This is the most expensive Van Gogh water colour to ever be auctioned at Christie’s. An earlier water colour by the artist went for almost €15m.

It is by no means the most expensive work by Van Gogh who earned practically nothing from his paintings during his lifetime. His Portrait du Dr. Gachet (1890) was sold at auction for €71.5m in 1990.

One of the other Van Gogh’s in the sale, Cabanes de bois parmi les oliviers et cyprès, went for a €71m, the highest price paid for any of the 23 works on sale.