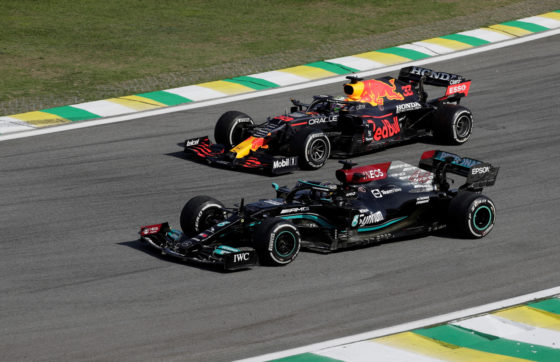 Max Verstappen says he is confident he can bounce back in the last three Grand Prix races of the season after Lewis Hamilton cut his lead in the drivers’ championship to 14 points.

Verstappen seized the advantage in the Brazilian Grand Prix by passing Hamilton’s team-mate Valtteri Bottas on the first corner to take the lead, but was unable to hold off the world champion, who swept past on lap 59 of the 71-lap race.

‘Today was a bit of damage limitation on a weekend where it was a bit difficult, but I’m confident that in the coming races we’ll bounce back,’ Verstappen said afterwards.

‘I think in general we did all the right calls, and trying to just cover, so there’s not much really to say about that. We were just a bit too slow.’

Hamilton’s win from 10th place on the grid was rated ‘one of the best drives in F1 by anyone’ by former world champion Damon Hill. His team took a five-place grid penalty for fitting a new engine, which was compounded when he had to start Saturday’s sprint race from the back because of a technical infringement during qualifying.

Mercedes were also aggrieved that Verstappen was not penalised for forcing Hamilton off the track when he attempted to overtake 11 laps earlier. Hamilton played down the incident after the race, but team boss Toto Wolff said the move was ‘over the line’ and complained his team had taken ‘many, many punches in the face this weekend’.

Hamiton said: ‘I think I was ahead initially, and I think he held his ground and we both ran out of road. Well, I think he was running out of road, so I obviously had to avoid … It’s hard battling and I wouldn’t expect anything less really. We didn’t touch wheels, which is good.’

Verstappen was fined €50,000 for inspecting Hamilton’s wing in the paddock during qualifying. ‘It’s quite a big fine, so I hope they have a nice dinner and a lot of wine,’ he said.

Verstappen will have to win at least one of the last three races to claim the title or rely on Hamilton having technical problems. The next Grand Prix is in Qatar on November 21.