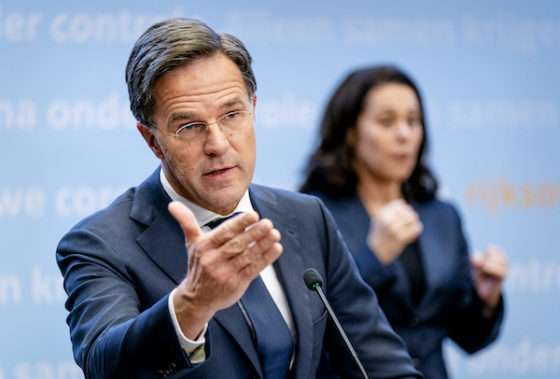 The Netherlands will virtually shut down from 5pm to 5am for at least three weeks from Sunday, as the cabinet struggles to reduce the spread of coronavirus, now at some 22,000 new cases a day.

Prime minister Mark Rutte told reporters at Friday evening’s press conference that a year ago, he and government health advisors thought the pandemic would be under control by the summer. ‘The reality is different,’ Rutte said. ‘And I am sure later evaluations will show that there were mistakes.’

In particular, Rutte said he blamed himself for failing to convince people to follow the basic rules. ‘Fewer than 50% of people are now having a test if they have symptoms,’ he said. ‘I take responsibility for that. We should do it better.’

With hospital admissions continuing to rise – there are now 528 coronavirus patients on an intensive care ward – action needs to be taken to reduce contacts between people by at least 20%, Rutte said.

‘All the current rules remain in place and from Sunday, between 5pm and 5am, in principle the Netherlands is closed,’ Rutte said. ‘This means events, concerts, theatres, cafes, bars, museums, gyms and sports clubs, with a couple of exceptions.’

Essential shops and services, such as pharmacies can open until 8pm and restaurants and snack bars can offer a takeaway service.

In addition, social distancing and face masks are being brought back in all places where coronavirus passes are currently required. In effect this means capacity will be reduced to one third. Shops too are to be limited to one customer per five square metres.

Talks will also take place with church leaders with the ‘urgent request’ to stick to the rules followed by the rest of society, Rutte said.

Furthermore, it is even more important that people restrict their travel around the country and work at home as much as possible, Rutte said. Visits should also be restricted to no more than four people over the age of 13 and one household at a time. He also urged people to take a self test before going out.

Schools will remain open because of the importance to children, but children from group 6 in primary schools and upwards should wear a mask when moving between locations.

In addition, ‘I am asking everyone to limit the contacts between children and the over-70s,’ the prime minister said. ‘Grab the ipad and make a video call or use the old-fashioned telephone. And with Sinterklaas, keep groups small.’

Rutte also appealed for people to watch out for potential victims of domestic violence and children who are not safe at home, as well as making time to check up on lonely people to make sure they are okay. ‘We must watch out for each other,’ Rutte said.

Health minister Hugo de Jonge said that  he hoped former healthcare staff, trainee nurses and doctors and others would come forward to help make sure that the booster campaign gets up to speed quickly. Some 750 soldiers have already been assigned to the project.

Next week, he said, he hoped to be able to give a revised timeline for the booster programme. The over-80s are only now being signed up for an extra shot and the government has been criticized for failing to act quickly enough.

The new measures will be in place for three weeks initially and the next press conference will take place on December 14.