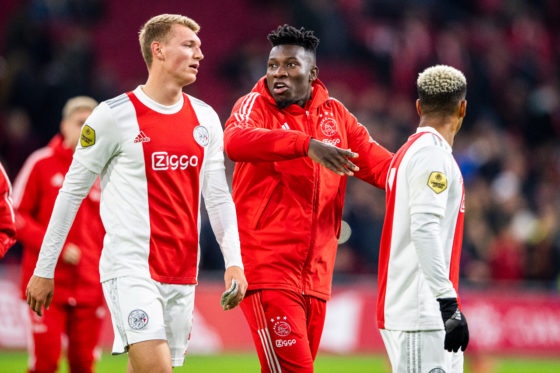 Ajax’s lead in the Eredivisie has been cut to goal difference after they were unable to break down a resilient Go Ahead Eagles side in Amsterdam.

The champions drew 0-0 for the second weekend in a row in a match that saw André Onana return to the squad for the first time since serving a nine-month for a doping violation.

Davy Klaassen came closest to breaking the deadlock with a header that came back off the post in the second half, while at the other end Remko Pasveer had to be alert to keep out Marc Cardona.

PSV took over at the top for a few hours after cruising to victory at Fortuna Sittard, with Bruma coming off the bench to score twice, but Roger Schmidt’s side once again failed to keep a clean sheet.

André Ramalho touched a rebound from a post into his own net when PSV were 3-0 up, to the frustration of his team-mates. ‘It’s good that the boys were annoyed,’ said Schmidt. ‘We played so well today that we really should have shut them out.’

Feyenoord moved up into third place, two points behind the leaders, as Cyriel Dessers once again conjured up an injury-time winner against coach Arie Slot’s former club AZ. All four of the Belgian’s goals this season have been in the 92nd minute.

Utrecht slipped up against Vitesse Arnhem in a match that featured two long-distance strikes. Riecheldy Bazour put Vitesse 2-0 ahead just before half-time with a cross-cum-shot that dipped over the head of Maarten Paes into the net. Utrecht pulled one back when Markus Schubert fumbled Arthur Zagre’s overhit pass into the net.

Twente moved up to sixth, leading a quartet of teams on 18 points, after an early goal by 20-year-old defender Mees Hilgers was enough to beat local rivals Heracles.

NEC had to settle for a point at home to Heerenveen, having looked good for the win when Ali Akman punished a poor defensive clearance in the 53rd minute. But Joey Veerman pounced on a similar error 19 minutes later to level the scores.

The gap at the bottom of the table swelled to five points as PEC Zwolle went down 2-1 at home to Cambuur Leeuwarden. Mees Hoedemakers smashed in a long-range shot for Cambuur’s first before Robin Maulun doubled the lead with a free-kick just after half-time.

Sparta moved up to 16th with a 3-0 win in Tilburg against Willem II, whose form has slumped since they beat PSV at the end of September. The home side had no answer after defender Bart Vriends headed home twice for Sparta in the opening half-hour.

A late strike by Jørgen Strand Larsen salvaged a point for Groningen at home to fellow strugglers RKC, who had gone ahead in the 14th minute through Michiel Kramer.