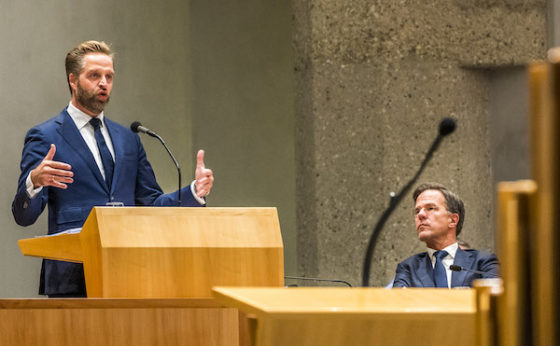 Support for the government’s plans to bring in a 2G system for the coronavirus passes, which would exclude people who have not been vaccinated from some situations, remains unclear but MPs did not rule it out altogether during Tuesday’s marathon debate.

During the debate, which continued until 2am, it became clear that no parties really want to introduce 2G, although the ruling VVD and D66 are most in favour. It is, VVD MP Aukje de Vries said, a question of the lesser of two evils. The alternative to 2G, she said, is more lockdown-type measures and that would be unfair on the people who are vaccinated.

Other MPs said they feared that the introduction of 2G would only increase the widening gulf between those who have and have not been vaccinated. They also expressed doubts about its impact on the soaring number of coronavirus cases, which topped 20,000 on Tuesday.

The Socialists, GroenLinks and almost all the minor opposition parties say they will vote against the plan when the new legislation is presented to parliament next week.

Coalition party ChristenUnie says it objects to the plan on principle because it will close more doors to people who have not been vaccinated. Instead, the party favours introducing testing for everyone, whether vaccinated or not. But the party has not ruled out toeing the government line.

Nor have the Labour party (PvdA) and newcomer Volt, although both have reservations.

The cabinet wants to have the option of limiting entry to certain locations – such as events and cafes – to people who have been vaccinated or have recovered from coronavirus. The application would be ‘as limited as possible’ and would never apply to people who cannot be vaccinated for medical reasons, health minister Hugo de Jonge said during the debate.

People who have not been vaccinated, he said, are now most at risk of developing coronavirus, becoming seriously ill and spreading it around. ‘The choice is limits for everyone or letting things continue for people who are least at risk,’ De Jonge said.

MPs will vote on the plans next week and the legislation must then go to the upper house of parliament, where the cabinet does not have a majority.

A poll by broadcaster NOS earlier this week showed 55% of the population back the 2G plan, with 31% opposed.