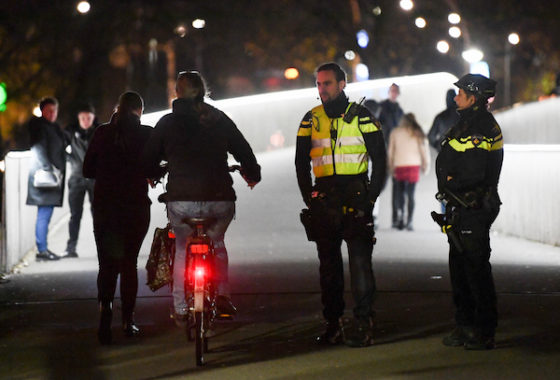 Police patrol around the centre of the Dutch northern city of Zwolle. Photo: John Thys / AFP

Police arrested over 30 people in a fourth night of disturbances on Monday night, but there was no trouble in the big cities.

Police arrested 13 people in Zwolle, after the mayor invoked his emergency powers because of rumours that riots were being planned.

The arrests were mainly for possessing fireworks and being unable to show ID, local broadcaster RTV Oost reported.

In the Frisian town of Drachten, police were also out in force following reports that trouble was being planned, but the evening passed off quietly.

In Roosendaal, 14 people were arrested for setting several fires, including a bus stop and in a playground. Most were aged 14 to 26 but a 51-year-old woman was among the arrestees, news website Nu.nl reported.

Several dozen youths in Apeldoorn vandalised a roundabout and threw fireworks at police, but it is unclear if any were arrested.

It is the fourth night in a row that police were called out to deal with groups of youngsters, following Friday’s riots in Rotterdam.

Meanwhile, the four people who were shot by police in Rotterdam are not in any danger, mayor Ahmed Aboutaleb told a television talk show on Monday evening.