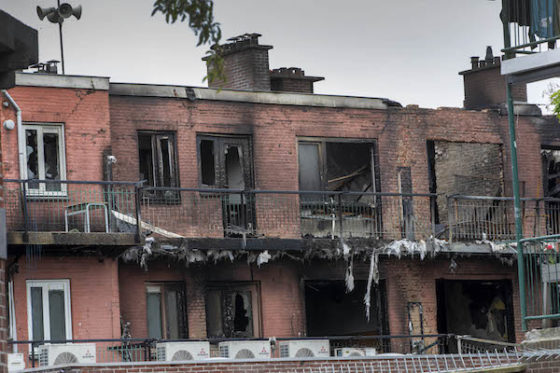 The aftermath of the blaze in May. Photo: Werry Crone ANP/HH

A massive fire was able to sweep through an apartment block in a residential part of The Hague in May, leaving 40 households homeless, because the building did not comply with fire safety standards, local broadcaster Omroep West has said.

In particular, the roof and polyester used on the balconies enabled the fire to spread quickly, according to investigators at safety institute IFV.

The researchers found that the roof on an extension to one part of the building was not fire resistant, or only had marginal protection, Omroep West said. The construction of the roof also allowed the fire to spread easily between apartments.

The balconies and screens between the separate outdoor spaces also apparently helped the fire to spread. The balconies had a polyester cladding which is neither fire proof nor heat resistant, the IFV said. The apartments were renovated in 1992, when the balconies were replaced, but this work was carried out without a permit.

If the building standards had been up to scratch, any fire would not have spread as quickly and the fire brigade would have been better able to extinguish it, the IFV report said.

The agency has recommended that the city council should find out which other buildings in the city have similar balconies and roof constructions.

However, city housing chief Martijn Balster said in a response that this would be an ‘enormous task’ and could lead to thousands of homes being identified with potential fire risks.

And according to council documents, ‘owners cannot be required to investigate any defects or demonstrate that extensions comply with building regulations, including those on fire resistance’.

Instead, officials will focus on both fire awareness campaigns and on the mandatory use of smoke alarms, the city executive said in a briefing for councillors.

The fire broke out around 3am in one of the apartments in the Schilderswijk district of the city. It spread quickly to other apartments, engulfing them in flames and then reaching a mosque which is part of the complex. No one died in the blaze.

The complex did not have a single owner, but had a combination of private landlords and social housing, Trouw reported at the time. Many of the apartments destroyed in the blaze were being illegally rented out to groups of seasonal workers.