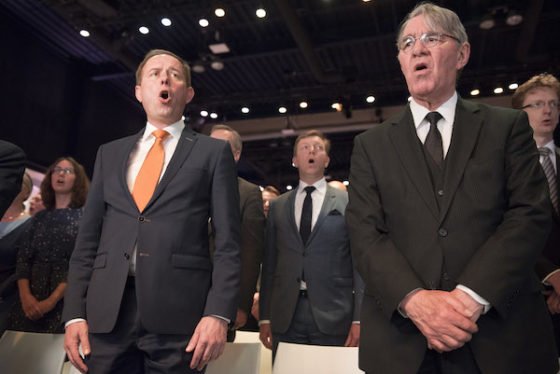 Bas van der Vlies, who led the fundamentalist Protestant party SGP for 24 years, has died at the age of 79. He had been seriously ill for some time.

Van der Vlies stepped down as an MP in 2010 after representing the party since 1981, when he was the longest serving parliamentarian. The parliamentary chairman said at the time he was an ‘institution’.

Traditionalist Van der Vlies, who was always dressed in a dark suit and tie, told the Historisch Nieuwsblad in 2008 that Dutch MPs are sometimes extremely scruffy and look as if they have come to parliament straight from a campsite.

He avoided television on religious grounds and did not start appearing in talk shows until 2005.

The Staatkundig Gereformeerde Partij is the most orthodox of the fringe Christian parties in the Netherlands and usually wins two or three seats in the 150-member parliament.

The party believes the country should be governed ‘entirely on the basis of the ordinances of God as revealed in the Holy Scriptures’ and does not think women should play an active role in politics.