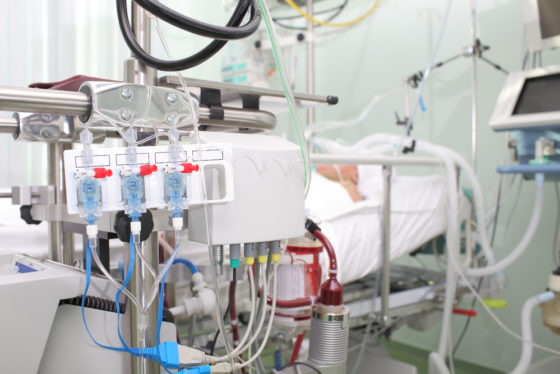 Hospital administrators in Limburg say they will run out of intensive care beds within weeks unless the government brings in ‘lockdown-style’ measures to stop the rise in coronavirus infections.

The Zuyderland Ziekenhuis, which has two sites in Heerlen and Sittard, said on Monday it was no longer taking in Covid-19 patients, and three other hospitals said the region was on the brink of a ‘code black’ scenario, in which doctors will have to select patients for treatment.

‘We are on course for a breakdown in healthcare and the whole system is gridlocked,’ the five hospitals said in a joint statement.

‘In practice that means “code black” at local level. We are convinced that other areas of the Netherlands will follow soon.’

They called on the government to bring in booster vaccines sooner for healthcare staff and vulnerable patients, as well as ‘lockdown-style’ measures to curb the spread of the virus.

The number of patients in hospital in Limburg is back to the levels seen last Christmas, when the Netherlands was in lockdown. If more intensive care beds are needed the hospitals will have to cut back on cancer treatment, the administrators said.

‘That is not responsible,’ they said. ‘Moreover, there are thousands of other patients who have been waiting months for treatment.’

November 11 is traditionally the start of carnival season in the southern provinces, but many parts of Limburg have cancelled their parades or restricted the number of spectators. But the hospitals said cancelling events would not be enough to bring down infections.

Meanwhile, pressure is mounting on ministers to speed up the start of a booster coronavirus vaccine campaign, which is not due to start until December.

MPs from four different parties, and two independents, have called on health minister Hugo de Jonge to start the programme within 48 hours, saying the Netherlands is trailing behind other countries again.

‘The Netherlands has a stockpile of six million vaccines so that can’t be the reason,’ MP Pieter Omtzigt said, while pointing out that several other EU countries have already begun giving booster shots to the over 60s.

The health ministry is currently in talks with the public health institute RIVM, residential care institutions and regional health boards about the campaign. The ministry has already said it will take time to organise it, because it has only just become clear which groups will qualify first.

Pensioners lobby groups have also called for action, questioning whether December really is the earliest start date. ‘We would like all older people to get a booster earlier, but if that is not possible, then look at the nursing homes,’ a spokesman for KBO-PCOB told broadcaster NOS. ‘That is where the need is greatest.’

De Jonge said at last Tuesday’s press conference that the over-80s would be eligible for a booster jab at the start of next month. People over the age of 60 would be called up in January and once they have been vaccinated, anyone else who wants a booster shot could come forward.

On Monday, Nijmegen’s Radboudumc teaching hospital also called on the government to speed up the rollout of coronavirus booster jabs to help drive down infections.

The minister is expected to say more about the situation at this Friday’s press conference.