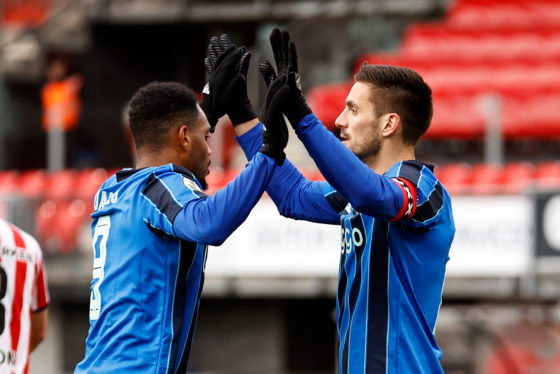 A narrow victory over Sparta allowed Ajax to open up a two-point lead at the top of the Eredivisie as rivals PSV conceded a late equaliser at Heerenveen.

Dusan Tadic poked in a short pass from Danilo for the only goal of the game 10 minutes before half-time, as Erik ten Hag’s side struggled to break down Sparta’s defence.

PSV took an early lead at Heerenveen when Carlos Vinícius finished off a flowing move after 13 minutes, but their frailties were exposed when a free-kick by Joey Veerman sailed through the defence to goalkeeper Joël Drommel and an unmarked Rami al Hajj tapped in the rebound.

Coach Roger Schmidt lamented his team’s failure to add to their lead as Vinícius and fellow Brazilian Bruma spurned several good chances in the first half. ‘This was worse than terrible,’ he said. ‘We were punished for not taking our chances.’

Feyenoord missed the chance to go level on points with PSV as they were held to a goalless draw in Enschede. Supersub Cyriel Dessers was unable to repeat his heroics in Prague as reserve goalkeeper Lars Unnerstall denied him three times in the second half.

Utrecht needed a slice of luck to hold on to fourth place, as Adrian Dalmau’s injury-time header was deflected into the net by Heracles defender Mats Knoester. Simon Gustafson had missed a penalty for Utrecht earlier in the game.

Cambuur Leeuwarden edged out NEC in a contest between two promoted sides. The Frisians came from 2-1 down at half-time to claim the points with goals from Roberts Uldrikis and Alex Bangura.

All three newcomers are in the top half of the table after Go Ahead Eagles won 1-0 in Tilburg thanks to a goal by right-back Boyd Lucassen.

Groningen moved further away from the relegation places with their second win in a row, beating Fortuna Sittard 4-1 in Limburg, while bottom side PEC Zwolle ended a run of three defeats with a goalless draw against fellow strugglers RKC.