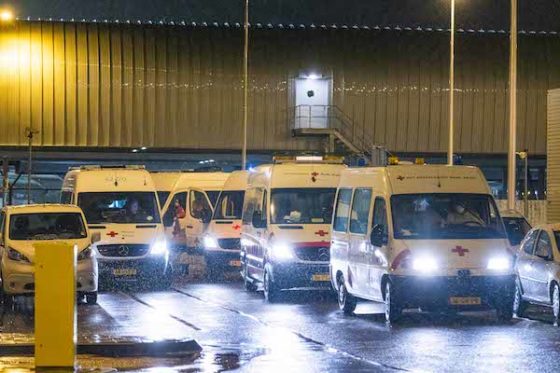 Health board officials say 61 of the 600 people on two flights from South Africa which arrived at Schiphol airport on Friday morning have now tested positive for coronavirus.

Officials said on Friday evening they expected around 85 people would prove positive, after initial tests suggested a 13% infection rate, but told news agency ANP later the actual total is 61.

All the passengers reportedly had to show a negative fast test no older than 24 hours before boarding the flight.

The passengers were kept at the airport well into the night while waiting to be tested and for the results. The Netherlands imposed a flight ban from southern Africa on Friday morning because of concerns about a new form of coronavirus, now named Omicron.

Officials say as yet they do not know if the passengers have the Omicron variant of the virus, which was first identified by South African experts, and scientists at Erasmus University in Rotterdam are now working on the samples to find out.

The World Health Organisation now says that the new variant, which has been identified in South Africa, Botswana and Hong Kong (via a traveller) appears to spread more quickly than other varieties of coronavirus.

The European Centre for Disease Prevention and Control has described it as a ‘variant of concern’ and said it ‘may be associated with increased transmissibility, significant reduction in vaccine effectiveness and increased risk for reinfections’.

Passengers from the two flights who tested positive were taken to a hotel where they will stay until declared coronavirus free, officials said, unless they live alone in the Netherlands, in which case they were taken home.

People with a negative test are also supposed to go into quarantine for at least five days.

One of the passengers on aboard was Stephanie Nolen, the New York Times global health reporter, who was on her first plane trip in two years and provided updates on the situation via Twitter.

Although testing negative herself, she said she wondered how long that would be the case, given the passengers were cooped up in a small space at the airport, and many were not wearing face masks.

‘Probably 30% of people are wearing no mask or only over mouth. Dutch authorities not enforcing. We’re just all in this unventilated room at hour 12, breathing on each other,’ she said.

Tested negative. At least today. After all that time with maskless yellers in an unventilated space – we shall see what the next days bring. Now I sit in the terminal for 10 hours until a flight to YYZ (bets open on something going amiss on that one)

Others spoke about the lack of information from officials, and said it took seven hours before they were given anything to eat or drink.

Lorraine Blaauw, who runs a support group for South African families in the Netherlands, told DutchNews.nl she had been contacted by several people on board the two flights.

‘It was chaos,’ she said. ‘No-one knew what was going on. There was no food, no milk for the babies. KLM provided 30 blankets for 600 people. The KLM crew just went home.’

The Kennemerland health board, which is responsible for testing at the airport, said it understood the frustration under passengers about the situation. ‘People who have just had a long journey… were confronted with a situation we have never had to deal with before,’ the health board said in a statement.

However, the operation was necessary ‘in the interests of public health,’ officials said.

Even though testing is required before flights, the Volkskrant reported earlier this week that some 80,000 passengers on flights to the Netherlands have been seated close to people infected with coronavirus.

The infected passengers – some 11,488 in total – were spread over 9,343 flights. Passengers within two seats of the infected person in all directions, and crew members who have been in close contact the person involved, are considered to be at risk.

Health minister Hugo de Jonge has now urged everyone who recently travelled to the Netherlands from southern Africa to get a test.

Although announced as a flight ban, the Netherlands is not refusing to allow in flights from southern Africa, and KLM has said it will continue to fly.

However, only people whose journey is strictly necessary, live in the Netherlands or are transferring to another flight will be allowed to travel, the airline said.