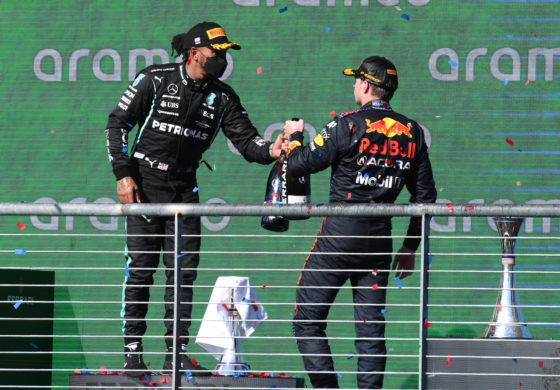 Cordial: Lewis Hamilton (l) and Max Verstappen on the podium after the race. Photo: AFP/Robyn Beck

Max Verstappen has said the next two races in Mexico and Brazil will be crucial to his ambitions of winning a first Formula 1 world title after his narrow victory over Lewis Hamilton at the US Grand Prix.

Verstappen held off a late charge by the reigning champion to win by 1.33 seconds as his Red Bull team’s ‘aggressive’ strategy of taking early pit stops paid off.

The Dutchman’s eighth victory of the season means he holds a 12-point lead in the drivers’ championship with five races to go.

Having won twice in Mexico and once in Brazil, Verstappen will be looking to take full advantage before the final three Grand Prix races on the Arabian peninsula.

‘I’m very happy that we increased our lead here, because we could easily have come out with a deficit,’ Verstappen told Ziggo Sport after the race in Austin, Texas.

P1 🔥 We did it 🤘 Great job guys, @redbullracing and @HondaRacingF1, really really good 💪 And you fans, thanks for all the support, just amazing 🙌 #USGP 🇺🇸 pic.twitter.com/B6lBH2fG4y

Hamilton was the pre-race favourite on a circuit where he had won five of the eight previous Grands Prix and took an early advantage when he overtook Verstappen, who started in pole position, on the first corner.

‘I thought I had a really good start; I think Lewis just had a really great start as soon as he was alongside me, that’s more or less it,’ Verstappen said.

His Red Bull team called him into the pits on laps 11 and 29 of the 56-lap race, leaving him to drive the final laps on degrading tyres as Hamilton, who pitted eight laps later, closed in.

‘The last stint was very long, in this heat especially,’ Verstappen said. ‘But we managed to hang on at the end just enough with the tyres to push with two laps to go. It wasn’t easy because the tyres were finished – but incredible to win here.’