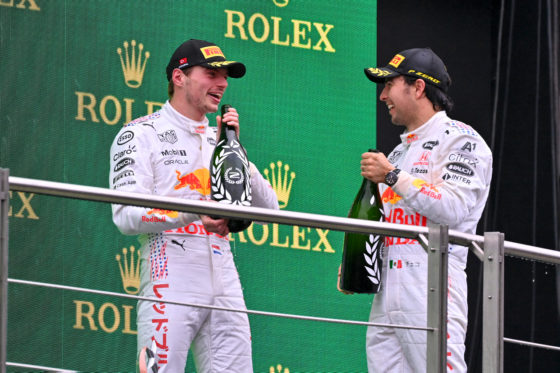 Max Verstappen described his second place in the Turkish Grand Prix was a ‘great result’ as he edged ahead of Lewis Hamilton in the title race.

The Dutchman acknowledged his debt to Red Bull team-mate Sergio Perez, who held off Hamilton’s faster Mercedes in third place. The world champion eventually had to settle for fifth behind Charles Leclerc after making a late pit stop.

The result gives Verstappen a six-point lead in the drivers’ world championship with six races to go. There were concerns in the Red Bull camp about their rivals’ superior straight-line speed after Hamilton’s team-mate Valtteri Bottas won in Turkey with a 14-second cushion.

‘The track was pretty slippery. In these conditions it’s easy to make a mistake,’ Verstappen said. ‘And Valtteri was simply faster. So this is a great result, especially as both of us got on the podium.

‘We’re in first place now, but we’re slower than Mercedes, I think. We need to analyse why we were off the pace this weekend.’

It was a frustrating afternoon for Hamilton, who was denied the chance to contest second place with Verstappen when his team called him in for new tyres with eight laps left.

‘If I had stayed out you don’t know if I would have held position, but I am a risk-taker so I would have wanted to take that risk,’ he said.

Red Bull chief Christian Horner said the new Mercedes engine – which led to Hamilton being penalised 10 grid places on the start line – was 10 to 15 km/h faster on the straight sections of the track.

‘I was surprised that they made such a big leap forward with their engine,’ he said. ‘They’ve clearly gained ground and it’s difficult for us to counter that.

‘The next race [the United States Grand Prix] is real Hamilton territory. But we’ve always performed well in Mexico and Brazil. The last three races are question marks, but it’s clear that we have to run a flawless operation.’