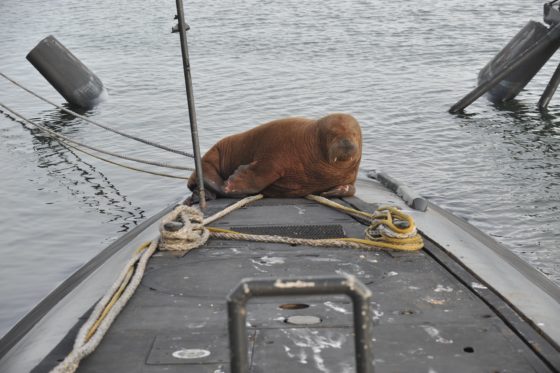 Freya the walrus enjoying a free ride on board the HNLMS Dolfijn. Photo: Koninklijke Marine

Submarines don’t often pick up hitchhikers, but a Dutch vessel made an exception this week when they gave a lift to an itinerant walrus.

Freya, the first walrus to be sighted off the Dutch coast in 23 years, was filmed by submariners enjoying a rest on HNLMS Dolfijn, which appropriately belongs to the Walrus class of vessels, on Tuesday morning.

‘It looks like they have more in common with this species of seal than we thought,’ the crew said on its Twitter feed. ‘Freya the walrus sought out the Dolfijn [dolphin] for a hug!’

The female walrus has been in Dutch waters for at least two months, having previously visited the island of Schiermonnikoog and the Zuiderpier in Harlingen.

She is thought to have swum down from her regular habitat in the polar circle via Denmark and Germany during the summer. The submarine crew said she appeared to be in good health.

The Pieterburen sea mammal rescue centre said she was ‘well able to look after herself and will find her way home in time if left to her own devices’.