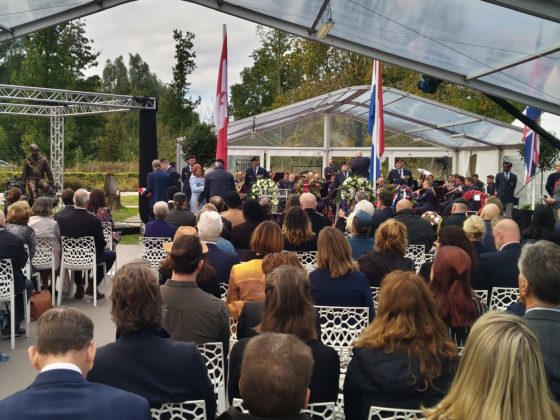 Fiona Williams (in blue coat) laying a wreath on behalf of the airmen’s relatives. Photo: DutchNews.nl

A memorial ceremony has been held for seven wartime airmen whose plane was recovered from the bed of the Markermeer lake nearly 80 years ago.

The BK716 Short Stirling bomber was shot down by a German fighter pilot on March 30, 1943, on its way back from a raid over Berlin. The wreckage was located in 2008 when a piece of machinery became entangled in the anchor of a stranded boat.

The recovery of the plane was the result of a decade-long campaign by the families of a different plane’s crew. For years the wreckage was believed to belong to another Short Stirling, the BK710, after a piece of its panel was misidentified by forensic experts.

The mistake was discovered in 2019 when a cigarette case was found bearing the initials of Flying Officer John Michael Campbell, at 30 the oldest man on board the BK716. The plane’s identity was confirmed when the recovery operation began last August.

Human remains were examined by the Dutch military salvage and identification service and funeral services for the seven crewmen, five from the UK and two Canadians, are expected to be held next year.

Relatives of the BK716’s crew were among the 150 people attending the hour-long commemoration in the Bos der Onverzettelijken memorial garden on Wednesday. The families of the BK710 crew were also invited and watched the ceremony by video link. 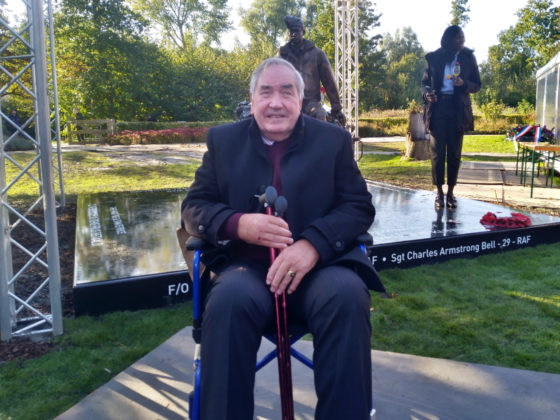 The Flevoland section of the Dutch Marine Veterans’ Contact raised the Canadian, Dutch and British flags, while 11-year-old local schoolgirl Stella van Velzen read out a poem, Trapped, describing the fatal crash from the airmen’s point of view.

Franc Weerwind, mayor of Almere, expressed his ‘sincere gratitude’ to the late crew members – ‘family members who gave their lives for our freedom and who we remember and commemorate’.

Leen Verbeek, the king’s commissioner for Flevoland, said the ‘heroes’ of the crash were ‘a symbol of all those others who died in the fight for freedom and serve to keep the memory alive so we will never forget’.

One of the highlights of the ceremony was the unveiling of a sculpture, Rise, by British-born local artist Laura O’Neill. It depicts an airman in uniform sitting on the wreckage of the engine, with his gaze fixed on a tree planted in the garden in memory of Anne Frank. 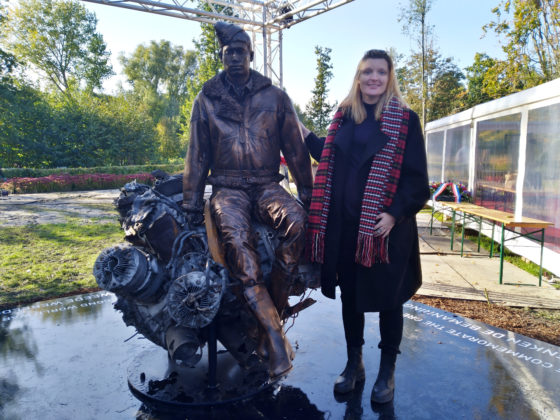 The artwork was formally unveiled by Princess Margriet, the sister of former queen Beatrix, who was born in 1943 while the royal family was in exile in Canada.

Fiona Williams, who travelled from Niagara Falls, Canada, for the ceremony, and Richard Shrubshall, from Kent, laid a wreath on behalf of the relatives. Joanna Roper and Lisa Helfland, the British and Canadian ambassadors to the Netherlands, also laid wreaths on behalf of their governments.

Mrs Williams’s 95-year-old mother, Edith McLeod, is the younger sister of Flying Officer Harry Farrington, who was 24 when he died on board the BK716, while Mr Shrubshall was born five months after his father, Sergeant Leonard Shrubshall, was killed. Mrs McLeod was unable to travel but followed the ceremony’s livestream.

‘I am so impressed with the way everybody in the Netherlands remembers [the war],’ said Mrs Williams. ‘And it makes me realise how lucky we were in Canada. Unless people come over here, I don’t think they realise that we were left relatively unscathed compared to Europe.’ 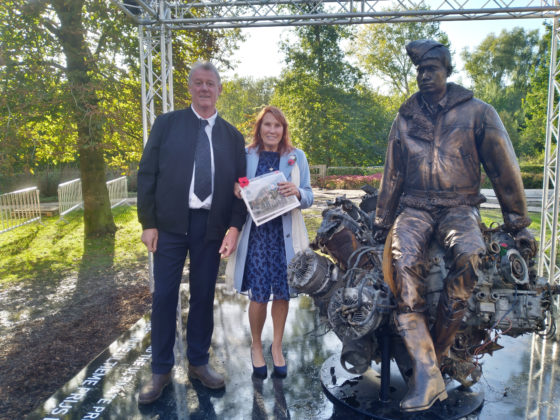 The ceremony had been postponed from its original date of March 2021 because of the coronavirus pandemic. Some of the relatives were only able to book their flights in the last three months after the European Union lifted its ban on travel from Canada in July.

John Campbell, the nephew of Flying Officer John Michael Campbell, said the news that his uncle’s body had been found was ‘incredible’.

‘My uncle and all these boys had been lost forever, it seemed,’ said Mr Campbell, 64, from north London. ‘Once they were found their story needed to be told. The way the city of Almere organised this event has been marvellous. And it’s a lovely location.’

Artist Laura O’Neill said the idea for the sculpture, Rise, came to her when she visited the park shortly after hearing that the city council was holding a competition to design a memorial to the BK716.

Laura, 31, from Manchester, came to Amsterdam five years ago as a student and now lives in Almere.

She said: ‘I sat on a park bench and just thought, it would be beautiful for a member of the crew to be sitting here. So I did a quick sketch and showed it to my grandmother, who said it would work. I knew it would have to speak to an older generation as well as a younger generation.’

She chose the engine part from the pieces of wreckage recovered from the Markermeer. ‘There were a few pieces I could pick from but this one was really special,’ she said. ‘It was quite popular back then for the airmen to pose for pictures next to their aircraft, so it made sense to have him sitting relaxing, finally, having a place of rest.’